“There is a wonderful mythical law of nature that the three things we crave most in life—happiness, freedom and peace of mind—are always attained by giving them to someone else.”—Peyton Conway March

When I was a teenager, I belonged to a Masonic organization called Rainbow Girls. We had monthly meetings, wore formals, learned rituals and deportment, but the main raison d’etre was to be of service to the community. It was a team of dolphins. We held “dime-a-dip” dinners to raise money to donate to the homeless, car washes that raised money for crippled children, quilting bees to provide presents to the patients in the nursing home. We served as teacher’s aides for special education classes in the summer and took baskets of food and toys to poor families at Christmas. And all the while we had fun, joy, and laughter while working to help others. The rewards we received far exceeded the gifts we gave.

Once a year, we joined a convocation of Rainbow Girls from across the state of California for “Grand Assembly.” The culmination of the conference was the announcement of the new Grand Officers for the coming year, awarded to the Assemblies who had contributed the most to their communities, ending finally with the top office, Grand Worthy Advisor.

We knew we had worked hard and contributed much, yet we had not had a Grand Officer for several years. We were excited—we were due. Yet officer after officer was announced and we were passed by. We despaired. Finally, the last five top officers were being named. Dared we hope? But one by one they were announced and we were not chosen. No, not us, no, no again. Only one office remained. “Grand Worthy Advisor.” We held our collective breath. Could it be us? Then we heard the magic words: we were chosen. We screamed, we cried, we jumped up on each other, pulled our hair and screamed some more. The top award was ours! We had done it! I still have the picture that was taken of us that day—it is all hands and arms, running mascara and shrieking open mouths of surprise and radiant joy.

Do you have a memory of such a win? If yes, it is one of the greatest treasures you possess. Take it out often and admire it as the priceless jewel it is. Revel in it again. If you do not own such a treasure, go create one, remembering that the first step in its creation is service to others.

After all your money is made and all your toys enjoyed, the heart of life is in friendship and service.

Today’s Affirmation:
“I give generously to myself and to others and reap rich rewards!” 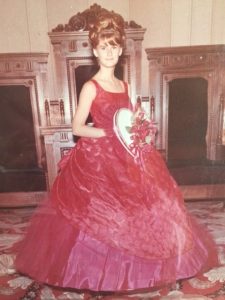 I promised to share some of the secret codes I put in this book. I used insider phrases or terms that people in various clubs or groups I belonged to would recognize, and our kindred bond would be reinforced.

Rainbow Girls is a wonderful organization, and I learned so much from this experience. When all of our hard work, service to the community, and giving to others was acknowledged by our being rewarded with one of our members, Pat Chinn, being named to the top Grand Office in the state of California. We were over the moon. Somewhere I still have a photo that was taken that day when the announcement was made – 30 screaming girls, grabbing each other, arms akimbo, mouths open, tears streaming. I think that was the most emotional high I have ever had in my life! Group wins are the best wins because they are shared.

Because the Grand Worthy Advisor was from our Assembly, we had the pleasure and responsibility of putting on her Grand Reception, inviting people from everywhere to visit and celebrate. I happened to be the Worthy Advisor of our Assembly at that time, so it was a big responsibility to take on during my senior year of high school. But though it was challenging, it was also great fun and very meaningful. I treasure these memories.

In Rainbow, we had secret signs and we had a secret word. I cannot divulge these secrets, of course. But I can let you know the secret word is used in the above article, and Rainbow Girls everywhere will recognize it.