A Fire in Malibu

“All that is gold does not glitter; not all those who wander are lost.”—J.R.R. Tolkien

I remember hearing Tom’s story, right after a big firestorm had raced through Malibu canyon. He told me how scared he and his neighbors were the night that the fire approached their homes. They waited breathlessly by their radios and television sets, waiting for news, waiting to hear if the wind had changed direction, was coming their way, if they’d have to evacuate. They leaned on each other for help and support.

No one paid any attention to the old man at the end of the block. He was a gruff old codger, not very friendly, always complaining about too many cars being parked in front of his house. By general consensus, they left him alone.

Finally, the word came; they had to get out of the canyon. They had to leave their homes to the caprice of the winds and the fire. Frantically, they searched through the piles of their belongings, deciding which treasures to take with them as they made their escape. As the first flames leapt over the ridge above their homes, they knew that time had run out. Now they had to run. They hugged each other, said prayers and goodbyes, and fled.

Today’s Affirmation:
“I appreciate the goodness, seen and unseen, in everyone around me.”

The next morning, the fire had run its course; the firemen had once again performed their miracles and drowned the flames. Tom and his friends steeled themselves to drive to their homes. Would they find them still standing? Or would only ashes greet their eyes? Anxiously, breathlessly, they drove up the canyon. All around them were blackened tree stumps and brick chimneys—all that remained of the beautiful houses that once stood there. Their hearts beat heavily and their mood was somber as they reached their street and rounded the corner.

What a glorious sight met their eyes! Although every house around them had been destroyed, all of the five houses on Tom’s street were still standing! And in front of them all stood the gruff old codger, with a garden hose. He had stayed behind and watered down all of their homes, all through the night. He had saved every one.

Is there anyone on your street you have written off as an “old gruff codger?”

“Cause we all just want to be big rock stars and live in hilltop houses driving 15 cars.”-Nickelback

The older I get, the more I appreciate my family. I am one of those fortunates who grew up with a loving, functional family group – mom, dad, and three of us girls. My sisters are married, and some of their children are married now too, so our little group has expanded over the years.

Several years ago, all 13 of us went en mass to Hawaii, and stayed in two condos near the beach at Napili Bay, Maui. Oh, we were so excited! We saved our money diligently in our vacation accounts for a couple of years, all our Christmas presents to each other consisted of Hawaiian shirts, sandals, snorkeling equipment and the like. It was fun just to look forward to it!

The day of departure arrived at last, and we jetted off, laughing and snacking on the plane, then unloading into a bunch of cars (the teens and twenty-somethings in the “Cool Car”), oohing over the magnificent rainbow that spanned the entire island, and settling into our condos. We basked in the sun, snorkeled with the sea turtles, shopped, luaued, hulaed, and had a marvelous time. Each condo group hosted a dinner party for the other, and we barbequed and played a poker tournament and a game of “spoons”. We got in the water early in the day and got out of it at suppertime. Heaven! 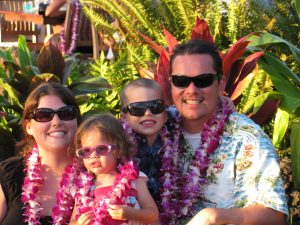 The only thing I missed were the dolphins. The guys had seen them on a fishing trip they took, so I knew they were around, but I hadn’t seen them. The people at the resort said the dolphins rarely came into this bay. That was disappointing news, but the night before the last day of our trip, I meditated and gave a call to the dolphins: “Please come into the bay tomorrow and visit me!”

The dawn of our last day came, and we all trekked over to the beach, to enjoy our last Maui surf and sand day. We didn’t know that this bright, sunny, serene beach day would turn dark and filled with danger.

“Help! Help!” a young boy screamed as his mother collapsed in the waves. My brother-in-law, Dick, who is a fire chief with the Los Angeles Fire Department, and my brother-in-law, Lloyd, who teaches gymnastics and had just completed a CPR review course, jumped to the rescue. They hauled the woman from the sea, started CPR, called the paramedics, and in their calm, cool, professional manner, handled the emergency.

“Help! Help!” Not three hours later, another emergency struck just paces down the beach from us. A man dove head-first into a shallow wave and struck his head. He couldn’t move. People struggled to drag his inert body out of the water. My neice Lindsey’s husband, Tyler, a paramedic with the LAFD, ran down the beach to help, followed closely by Maxie, her sister Marissa’s husband. Maxie watched in awe as Tyler took control of the situation and gave orders to all of the horrified onlookers, “Stand back.” “Give us some room here.” “You – have a cell phone? Good, call the paramedics.” “You – stop yelling and get towels.”

The man was scared because he couldn’t move and was afraid he had broken his neck. Tyler spoke reassuringly, calmed him, and said that it could just be a sprain and a temporary paralysis. Again, the emergency rescue squad arrived on the beach and took over, and my nephews by marriage returned to our beach towels. I’ll never forget the look of respect on Maxie’s face as he related to the rest of us how masterfully Tyler had handled the emergency, finishing with, “Man, people talk about rock stars, but you’re the real rock star!”

Never mind about the same old celebrities that capture the headlines of our media in endless repetitions. There are wonderful people in your life beyond the superficial vagaries of fame who are worth more than gold – paramedics, firemen, teachers, sisters, brothers, mothers, fathers. I looked at the unique individual rock stars of my family with deepest love, and thanked God again for the people in my life that make my life beautiful.

And as I turned to gaze across the sun-sparkled ocean, the dolphins swam into the bay.