“The real tragedy of life is not that it’s one damn thing after another—but it’s the same damn thing, over and over.”—Unknown

Have you ever felt that, no matter what you did, you couldn’t rise above a certain amount of spendable income? That those extra fun frills in life you long for are always just out of reach, even when you get the raise, or the insurance settlement, or the inheritance? Like a broken thermostat, the financial setting has gotten stuck on an amount of money that you subconsciously believe is the best you can allow yourself. You’re stuck at just enough to get by, just as the thermostat is stuck at sixty degrees. You want to be warmer, and seventy-two degrees sounds great, but the thermostat won’t budge. That’s what keeps us at “getting by money” instead of “above and beyond money.”

I began to notice this as a trend in my own life and it was mirrored by the experiences of my clients, as well. It became clear one day when I got home from a speaking engagement for which I was paid $1,000. As I drove home from the event, with my bright, crisp check for $1,000 of extra money—unplanned for and unbudgeted—I thought about all the things I could do with this windfall. I hummed happily to myself as I walked in my apartment and got myself a soft drink from the refrigerator.

I plopped myself down on the couch, reached for the remote and turned on the television set—which promptly blew up. Well, it didn’t exactly blow up; it made a loud popping noise and went blank. A puff of smoke came out the back of it. My dreams of new purchases went out the window with that puff of smoke. I now knew what I was going to be buying with my check—a replacement TV.

Disappointed as I was, I had to laugh. I knew exactly what had happened. My money had exceeded my financial thermostat setting, so I created something to have to use the money for that would basically keep me even instead of being ahead. Has this ever happened to you? You get the raise—and the school your kids are in raises its tuition. Or you get the inheritance and then the car breaks down and you have to spend the money to fix it. You get a gift of money, but you find out you owe more taxes than you originally thought. When these things happen, you need to raise your money consciousness.

To raise your net worth you have to raise your self-worth. You need to look at your opinions or beliefs about money that limit you and change them. Think of yourself as rich and abundant, with plenty to have and to give. Feel good about the receiving of abundance as well as the giving, for they are two sides of the same coin. Thank God for the gift and pass it on. Light the fire, raise the thermostat, increase the heat! And more money will come to warm itself in your glow. 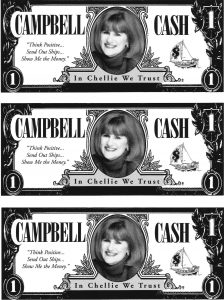 It’s always very interesting when the topic of pricing arises with the participants in my Financial Stress Reduction® Workshops. People have many issues surrounding charging money for their products and services. The most usual one is that they don’t charge what they really want to charge – they’re afraid to price themselves too high and lose a sale. Especially during the “Great Recession!” Don’t we have to slash our prices, have a big sale, help our clients with payment plans?

The answer is “sometimes”. But if you slash your prices so much that you lose money on every sale, how is that going to help you?

Joe was a very polished, profession attorney who specialized in financial fraud issues (he must be really busy right now!) and worked on a contingency basis. He was struggling with his budgeting because he would work on a case for as long as two years before the case was decided and he got paid.

“Do you get a retainer up front to help with costs?” I asked.

He started to answer and then stopped himself. He smiled and said, “Well, I guess I’ve been afraid that if I ask for too much, they’ll leave and go somewhere else.”

“If they can’t pay you what you need to live, they should go,” I answered. “You need to at least ask for what you want – you can always negotiate a bit if you need to. Why not try it?”

“You’re right,” he said, “I have three prospective client meetings this week and I’ll try asking them for $5,000 and see what happens.

He left with that idea in mind, and I looked forward to seeing him at the next class session.

The following week, he was the first one to report his progress: “You remember I had three meetings with prospective clients last week? I asked each one of them for a $5,000 retainer. And you know what? Each one of them wrote out a check for that amount with no questions asked! And now I have $15,000 in the bank!”

So what are you charging? What would you like to charge?

PrevPreviousThe Balance Sheet
Next“Getting By” Money vs. “Above and Beyond” MoneyNext