You Don’t Have to Know Everything

“When in charge ponder. When in trouble delegate. When in doubt mumble.”—Unknown

I used to think I had to know everything myself. What a mad scramble that was.

When I was president of the Los Angeles Chapter of National Association of Women Business Owners (NAWBO), I had to get over that idea—fast. There was just too much to do, and a lot of it was beyond the scope of my capabilities. I quickly learned to delegate, and to compile a roster of great resources—people who were terrifically talented at their chosen professions.

NAWBO had an advisory board of politicians, business, and community leaders who helped with policy and strategic planning for the group. One evening after a board meeting, two of the advisors, a civic leader and a businesswoman who owned a multi-million dollar company, stopped to ask me a question.

The businesswoman asked me a computer question. I said that I didn’t know the answer, but I knew who would know, and gave her the name and phone number of one of my computer consultants. The other asked me an investment question, and I said I didn’t know the answer to that either, but I knew a great financial planner and gave him her number. Then I was asked a legal question, which I referred to an attorney I knew who specialized in that area.

In the pause as they wrote down all this information, I laughed deprecatorily and said, “I myself know nothing. I just know people who know.”

I never forgot the businesswoman’s response. She said, “Ah. A true leader.”

Today, take time to ponder. Mumble if you must. Then delegate.

Today’s Affirmation:
“I am a leader and a way-shower. I help all around me find the right path.” 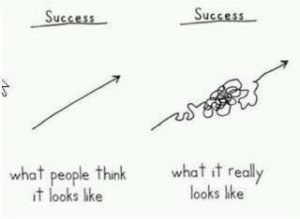 I love this graph of success – one of my Facebook friends posted it one day. Isn’t that just the way the road of life goes? All twists and turns and detours and do-overs, backward and forward, up and down, sideways and everywhichways.

When you’re in the tangle of it all, you sometimes despair and sometimes celebrate, but you’re always moving on.