The Saga of the Pants

“It’s a little like wrestling a gorilla. You don’t quit when you are tired, you quit when the gorilla is tired.”—Robert Strauss

This tale comes from Corinne and Dave Pleger, who participate in Civil War reenactments with authentic costumes, sets, and props. It is a great lesson in how commitment and intention will take you through breakdowns into breakthrough:

“Over a year ago, Corinne took a class that taught her how to sew an authentic pair of Civil War Federal Army pants. Corinne sewed a pair for me that immediately became the envy of my unit. One man, Ron, admired my pants and asked Corinne to make a pair for him. Normally, Corinne refuses to make clothes for other than family members, but since Ron had made me a period ammunition box, she agreed. By lucky coincidence, Ron is exactly my size, so all Corinne had to do was to duplicate the job she did on mine. Her self-imposed deadline was the annual Civil War Christmas party on December 12th.

“It took awhile for Corinne to get started because she hadn’t kept any notes from when she made my pair, but eventually she went at it. Night after night she worked industriously on the pants until they were nearly done. But when she brought them downstairs for me to try on, they didn’t fit. The waist measured 38 inches instead of 41 inches. No amount of inhaling and pulling would make these pants fit. There was nothing to do but make a second pair.

“Newly ordered material arrived on December 4th and all through the weekend she slaved over the pants. She had them nearly finished on December 6th and measured the waist—39 inches. Corinne was upset. To be more precise, it was not a good evening to be near her. Corinne called me at work the next morning and said that she had calmed down and had ordered more material, determined not to be defeated.

“The material arrived on December 8th and was generously cut that night. A driven woman sewed late into the night on the 10th, so determined to make progress that she let everything else fall unattended by the wayside. On the night before the party, Corinne continued to sew. In some mysterious way, when Corinne completed the fly, it was on the wrong side of the pants. Perhaps this project was jinxed.

“Corinne resolved to finish the hem on Ron’s pants while I drove us to the Christmas party. I drove very carefully so as to avoid having the car wrecked by the curse of the blue pants. Just as she finished, the light on her portable reading lamp burnt out. But this is a story of triumph! Ron loved his pants and two other guys immediately bought Corinne’s other pairs.”

Although Corinne has renewed her vow not to sew for people outside of the family, she learned that she has the determination, stick-to-it-ness, and confidence in her own abilities to see a project through despite any obstacles that threaten to bar the way. No matter what you’re facing, keep your eye on the prize and keep going.

Today’s Affirmation:
“I am committed to achieving my goals.” 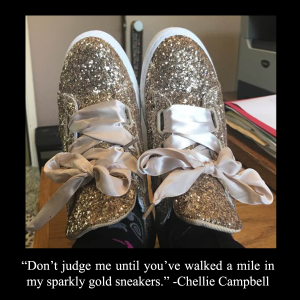 “I think my car’s been stolen!” my roommate’s plaintive voice on the phone exclaimed. She had called me five minutes earlier as she was leaving work, and said she would pick me up for dinner. Now she couldn’t find her car.

“I’m on my way,” I said, and grabbed my coat, purse and keys on the way out the door. I was concerned she was left standing alone outside on a dark street, but I was only 15 minutes away, and I drive fast 🙂

I spotted her immediately, cell phone in hand, talking to the police department. When she got in my car, she finished the call and said her car had been towed. I drove past where she had parked, and there, in big bold red letters, was a “No Stopping” sign listing hours 7 – 9 am and 4 – 6 pm. It was right above the green sign that said 2 hour parking, but she hadn’t noticed it.

“Well, Missy, you were a bad girl,” I admonished her. She hung her head sheepishly. “And those towing charges are expensive you know!”

She brightened at that. “It’s okay,” she said smiling, “I have a credit card.” And off we went to dinner.

The next day, when we went to retrieve her car, we walked in laughing, which I must tell you, completely mystified the man in charge of the impound lot. He said most people who come in are angry, which is why he was behind a big plexiglass wall. Ah, well, Shelley and I aren’t most people – we’re dolphins!

A client of mine once told me her father used to say, “If money can solve it, it isn’t a problem.”

True. Would that all problems were so easily resolved.

No matter what you’re facing, keep your eye on the prize and keep going.