“Speak when you are angry and you will make the best speech you will ever regret.”—Ambrose Bierce

We rub up against each other the wrong ways sometimes. Like trying to force a jigsaw puzzle piece into the wrong slot, we try to make others fit into our picture. What we mean to create gets lost, misunderstood. Fights erupt, grudges carried, friendships broken. We listen but do not hear, for our understanding is blocked by the stone walls of our own perception.

Linda, my friend, fellow writer and proposal coach, called today to offer help with my book proposal. I had gotten a very positive response from a publisher and was waiting to hear whether they were going to make an offer to buy it. Linda thought that we could spend additional time and energy polishing the proposal and the combination of our positive focus and work would help the project along. I thought she was telling me the proposal wasn’t good enough yet and I’d better do some more work on it or it wasn’t going to sell. To say she didn’t find me in a receptive mood is a rather gross understatement.

“The proposal is fine just as it is!” I exclaimed. “It doesn’t need to be redone a fourth time! One of these publishers is going to buy it soon and I don’t have to polish it again!” Linda quickly backpedaled, tried to explain; I wasn’t buying it. Here was Linda, trying to help, and I bit her nose off. I felt she was telling me my book hadn’t been picked up because the proposal wasn’t good enough. Playing the waiting game while trying to keep my thoughts positive was stretching my fragile nerves tauter than I realized. I’m not proud of my response. St. Chellie would never have responded this way.

We hung up the phone quickly, but both of us sat with the negative energy and fought mental battles. She wrote me a letter, I wrote this page; I called her back. We explained our intentions, our feelings, our love, mutual admiration, and respect. Our friendship held, peace and equanimity restored.

Sometimes our words belie our intentions. “Do unto others as you would have them do unto you,” doesn’t always work. What they want done isn’t always the same as what we want done. As an actress, I watched directors at work—some yelled at all the actors; some coddled all the actors. But the best directors yelled at the ones that needed yelling at, coddled the ones that needed more confidence, left alone the ones who needed to work things out alone. Linda is a fabulous writer and in her meticulous attention to detail produces work much closer to perfection than I. I rush to completion, let the details fall where they may, and get done faster. They are different styles of work and behavior, and we each have much to gain from the other.

When her blue meets my red, a clash may occur, but if we keep talking, reaching for understanding with compassion and love, we create purple.

Today’s Affirmation:
“I enrich my life with wonderful friendships in rainbow colors.” 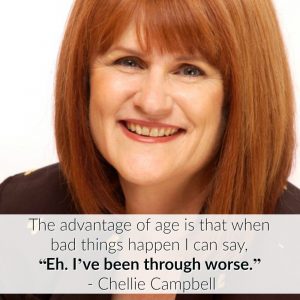 Anger is actually a good tool to have in your toolbox. I know because for years I didn’t have it. In my family growing up, it just wasn’t okay to be ill-tempered, out-of-sorts, or angry. If you were, you were sent to your room to collect yourself. This was really great for a peaceful, conflict-free atmosphere at home most of the time. However, when I needed to be angry or fight back out in the world, I was missing that ability, having squelched angry feelings for so many years. Like when my husband yelled at me, I froze. Yelling scared me – I wasn’t used to it. I just wanted to tell him “Go to your room and settle down!” Not really effective.

After my divorce, bit by bit I got reaquainted with my anger. I watched other people who had a healthy sense of balance and who were lovely, kind, and even-tempered most of the time but who could get their dander up and draw the line in the sand and yell back at someone at appropriate moments. It was a skill I needed to learn, so I studied it. You see, if you don’t have the potential for anger, you will often get pushed too far, compromise your values to keep the peace, and otherwise behave as a tuna.

Playing poker helped me with this. Nothing can make you more ill-tempered than losing money, especially when other people are winning your money and lording it over you. Argh. One night, a woman (I’ll call her Susie) was drinking heavily, winning a lot of pots, and laughing and loudly making fun of everyone else, cackling that they were bad players and deserved to lose, etc. My patience was wearing thin when she won yet another pot against a lovely older gentleman who she then raked over the coals, calling him a stupid player. She was standing up and laughing, and sitting next to her, I said, “Come on, Susie, settle down and sit back down.”

“Don’t tell me what to do, you freaking bitch!” she screamed.

Whoa! That completely shocked her. The floorman came running over and got between us and suggested there was a seat in another game if one of us would like to move. I stood my ground. I was really mad! And she left to go to the other game.

As I sat back down, the other players at my table smiled at me and applauded. Hee.

After that, when another player would snipe at me or cause a problem at the table, the other players would shush him and say, “Don’t make the redhead mad.”

So anger is a tool in my box now. I don’t take it out often, but I’m glad to know it’s there if I need it.