“Much ingenuity with a little money is vastly more profitable and amusing than much money without ingenuity.”—Arnold Bennett

When I can’t decide whether or not to do something, I use a sales technique called “The Benjamin Franklin Close.” (I don’t know why it’s called that.) I take a piece of paper, draw a line vertically down the middle of it, and label the left hand column “Pro” and the right hand column “Con.” I write down all the reasons I can think of for taking the action in the left column, then all the reasons for not doing it in the right. By the time I am finished, it is clear to me which is a longer, stronger list.

Years ago, when I was trying to decide whether or not to keep my office or move my business into my home, I used this technique. Here’s how it looked:

It was clear to me that I really wanted to move and that in the long run, it would not only be more convenient, but would save money. Since all of the “Cons” involved expenditures of money that weren’t on my regular budget, I started thinking about how I might “find another way to get what I wanted.” I wanted to hire a mover who was in my LeTip networking group, and I remembered that he had mentioned an interest in my workshop. I called him and asked if he’d like to do me a favor and move me and I would do him a favor and let him take my workshop for free. He said “Yes!” with alacrity.

Flushed with success, I thought the same offer might hold with the professional organizer in the group, and also the printer. They both happily agreed. So the net cost of my move was—zero!

Is there something in your life you are undecided about? Try the Benjamin Franklin Close. If that doesn’t work flip a coin. By the time the coin lands, you’ll know on which side you wanted it to land. You can tell because that’s when you toss it again, telling yourself, “Well, two out of three….”

Today’s Affirmation:
“I give of my bounty to others and they bounce it back to me!” 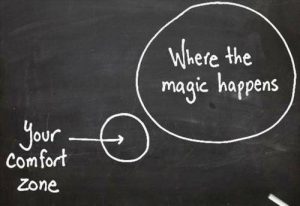 Not too long ago, I went to my 50-year high school reunion, and I’ve been a bit nostalgic since then.

But not for the way society was in 1966. White male privilege reigned supreme, there were only 13 women in Congress, and a woman being the CEO of a major corporation was so rare I didn’t know if there were any. There were “Men Wanted” and “Women Wanted” ads for job positions, and the top jobs were never in the Women’s column. Women were expected to stay home and raise children. If you worked, you were a secretary, a teacher or a nurse.

Betty Friedan suggested in “The Feminine Mystique” that women had brains, ambition, and talent beyond home economics. Men fought that idea and many women resisted gender equality along with them. National Organization for Women (NOW) was started in 1966. I remember one of their campaign buttons was a parody of a cigarette ad for women that said, “You’ve come a long way, baby”. The NOW ad said, “We haven’t come that far, and don’t call me baby.”

Hillary famously spoke about women’s rights when she gave the Valedictorian speech at Wellesley in 1969. She said, “…the challenge now is to practice politics as the art of making what appears to be impossible possible.” She a was one of two women at her bar exam, and they were yelled at by the angry men there who said they were taking jobs away from men who needed to support their families.

She put her head down, ignored them and worked. And always thereafter, she put her head down, ignored the opposition, and worked. “Women’s rights are human rights” she said, and made the world a better place for us all. And paid the price that all leaders pay when they step outside the box of the “way things are” into “the way things could be.” People hated her for keeping her maiden name, for keeping her job as an attorney when First Lady of Arkansas, for not baking cookies. Still she kept her head down and worked, and helped create a rainbow world where there’s a pot of gold that can be shared by everyone.

Back in 1966, I never dreamed I would see the day that a woman might be elected President of the United States. Hillary came close, and the last mid-term election saw over 100 women elected to Congress! And they’re black, brown, Muslim, LBGTQ – as wide a diversity as you can imagine.

We have indeed come a long, but not as far as we’re going to go!