An issue of People magazine ran a story about a young couple who wanted to have a beautiful dream wedding, but didn’t have much money to invest in it:

“You may now kiss the bride…after a word from our sponsors.”

Okay, the minister didn’t quite say that at Tom Anderson and Sabrina Root’s August 23 wedding—but he could have. To pull off their 250-guest dream nuptials, the cash-strapped but enterprising Philadelphia couple persuaded twenty-four local businesses to chip in some $32,000 worth of essentials—everything from the gold wedding bands ($500) to the exotic floral arrangements ($2,500). In exchange, the groom thanked each sponsor before the first toast and provided plugs on the invitations, on cards at the buffet, and on scrolls on the dinner tables.

“I always wanted a fairy-tale wedding,” says Anderson, 24, a bartender who hit on the idea, he explains, after soliciting prize donations for a raffle. His bride, a 33-year-old hairstylist who met Anderson when she walked into his bar in June, 1998, the day she received the divorce papers ending her one year first marriage—was skeptical at first. “I knew people were thinking, ‘Will this be tacky?’” she says. But she eventually gave in. “Neither of us wanted to ask our parents for money,” says Anderson, who labored for nearly a year to line up the sponsors.

Among the goodies: sushi, broiled salmon and Italian pastries from eight area eateries; a deejay to play Disney ballads; limos; a handmade tulle veil; even a weeklong Cancun honeymoon. The two laid out just $8,000 of their own money to rent a Glenside, PA, castle, hire food servers, buy liquor and pay for Root’s $1,600 dress. Weren’t the guests scandalized by such blatant commercialism? If so, they weren’t saying. “It was terrific,” insists Root’s mother, Elizabeth. “Tom was just a genius.”

This is perfect example of “find another way to have what you want.” They were creative, determined, and clearly, good at sales! They got the wedding they wanted and the vendors got publicity, good will in the community, and great advertising at an event with a large captive audience. Everybody won.

What is it you want that you can’t get through the usual channels? Get creative! Gather a team of friends to brainstorm ideas with you (dolphins only, please). What do you have to trade? What can you contribute to someone else in exchange for what you want? Make a plan then take action. Anything is possible.

Today’s Affirmation:
“With the help of friends and my creative ability, I make my dreams come true!” 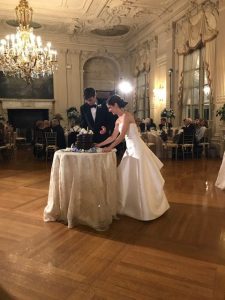 I love this story! It’s such a creative solution to a budgetary problem. As I say in my workshops, financial stress reduction® really boils down to three things:

This story is a perfect example of #3. We’re all graduates of MSU – Make Stuff Up. What can you make up today that will give you more of the rich life you desire? Start affirming that today, and then send out some ships. You may be very surprised by the ships that come in as a result!

Find another way to have what you want.