“Very little is needed to make a happy life; it is all within yourself, in your way of thinking.”—Marcus Aurelius

As human beings are creatures of endless desire and hunger for betterment, it is our nature to always want to improve ourselves and our circumstances. This can be a positive force, motivating us onward to greater glorious goods for ourselves and for others. However, one can become lost in the constant search and craving for the next best thing, so trapped in future imaginings that we discount and ignore the accomplishments of the past evidenced in our present.

The art of happiness is an act of balance. We need to appreciate the process while we work within its creative ooze, the end result as yet unformed, like elements banging against each other in search of becoming sentient. As children playing with mud pies, the fun is in the making: baking in the golden sun, fingers sticky with mud-paint, grass-stained knees, brow wrinkled with concentration, searching for the perfect fine-grained dark earth to fashion into visionary pie. Day’s end will come soon enough, no need to hurry to completion, for then the fun is over. Rejoice in the dreaming, glory in the doing, and let the dirt clods fall where they may.

Now, today, with your own mud-luscious imagined inventions, play with the ooze and be happy.

Today’s Affirmation:
“I am a rich child playing happily in Life’s rich playground.” 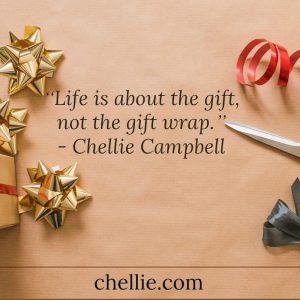 I saved an article written back in 2006 by Janet Cromley in the LA Times, called “A Chuckle a Day”. It has some wonderful statistics about our mind/body connection in response to laughter:

No joke. A good belly laugh – or even the anticipation of laugher – appears to beneficially affect the body’s hormones.

Researchers at Loma Linda University and Oakcrest healthy Research Institute in Yucaipa discovered this in a study of 32 healthy men, half of whom were instructed to view a one-hour humorous video of their own selection. The other half simply sat in a room with an assortment of magazines.

Blood was drawn before, during and after the trial.

The scientists found that those chosen to watch the humorous video had, on average, 27% more beta-endorphins and 87% more human growth hormone in their blood than the control group – before the video clips even started to roll. The levels of these beneficial hormones remained elevated during and after the experiment.

The research, presented at a meeting in San Francisco last weekend, builds on previous studies that show exposure to humor has other healthful effects, such as lowering levels of the stress hormones cortisol and epinephrine.

“The benefits of laugher are similar to exercise,” says lead researcher Lee Berk of Loma Linda University. “Laughter has a positive effect on the cardiovascular system. Blood pressure is lowered overall and resting heart rate decreases. Additionally, the immune system appears to get tuned up.”

In short, he says, “We should become more serious about laughter.”

P.S. I used the word “mud-luscious” which is from a wonderful poem “In Just” by e.e. cummings that I first performed in a reader’s theater production in high school. I never saw it used anywhere else, but I thought it wonderful and wanted to spread its usage here. Google it and you can read the whole poem online.

Rejoice in the dreaming, glory in the doing, and let the dirt clods fall where they may.