“You can have what it is you want, or you can have your reasons for not having it.”—Werner Erhard

It is an interesting phenomenon that when told of a problem, most people will try to be helpful and offer advice to try to help solve it. It seems to be just naturally what people do. The response to the helper’s advice often sounds like this: “Yeah, but that won’t work for me because…,” or “Yeah, but I tried that once and it didn’t work…,” or “Yeah, but my case is different….” This is the voice of someone who is defending their position, not looking for solutions. They are great at finding evidence for why problems can’t be solved rather than actively looking for help to change their situation.

“Yeah, buts” have a very negative psychological effect on the person trying to help. They’ve just been rejected, essentially told that their advice is no good, inappropriate or doesn’t work. It’s very difficult to keep trying to make positive suggestions to Yeahbutters. “Yeah, buts” build a big dam in the river of creative ideas.

I had buttons made for my workshops that have the words “Yeah, but” on them surrounded by a red circle with a red line through it—“No yeah, buts.” I explain that that phrase is not allowed in my classroom. So during each class, when someone is offered advice and forgets and says, “Yeah, but…” I throw them a button. Sometimes, with incorrigible Yeahbutters, other people in the class get up, grab a button and throw it at them. People have been known to leave class wearing eight or ten buttons!

You will find yourself getting richer and happier when you eliminate the words “yeah, but” from your vocabulary. Instead of “Yeah, but” say, “Thank you for the suggestion! Help me see how I can apply that to my situation.” Now you have two people working on the problem side by side, instead of two people, with the problem between them, arguing about it.

Think you can make it through today without one “yeah, but”? 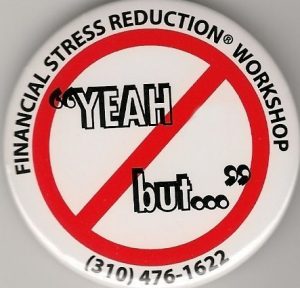 I admit to being a World Class Yeahbutter myself.

Yes. We often teach best what we need to learn most, as Richard Bach said.

When someone said, “Chellie, you should teach workshops!” I said, “Oh, no, I don’t think I can do that.”

When someone said, “Chellie, you should write a book!” I said, “Yeah, but that’s too much work and I don’t want to schlep product around.”

When someone said, “Chellie, you should franchise your workshops!” I said, “Yeah, that’s a great idea, but I’m not ready to do that yet.”

Upon reflection, I think “yeah, buts” are often the way we work things out in our minds before we take action. We do need to be thankful for the cautionary voice inside us that reminds us that there might be potential downsides to our plan. We have to consider the ramifications of our actions before embarking on a new course of action. What are the problems we might encounter? What would we be willing to do to surmount them? How might our life be changed if we get what we want?

Sometimes “yeah, but” is just a wishy-washy way of saying we don’t want to do it. So pause before the next time you’re about to say “yeah, but” and think if what you really mean is “Thanks for the suggestion, but I’ve decided against doing that.” It’s certainly fine to say, “No.”

But you want to be careful not to shut-down your Creative Contributors from having great ideas for you. You want them to keep coming, because sometimes they have an idea that is so perfect for you, your answer is going to be, “Wow! That’s a fabulous idea! I’m going to get started on that right away!”

Isn’t that what you most want to hear when you offer someone a suggestion?

We have to consider the ramifications of our actions before embarking on a new course of action.

PrevPreviousBuy the Artichoke
NextHow Badly Do You Want It?Next