“The best way to reduce your bills is to put them on microfilm.”—Anonymous

Sophie, a talented writer, was between jobs. She was thinking creatively about what to do next—should she look for employment or start her own business? She was doing research considering her options, when she realized her current funds weren’t going to cover her budget for the month. Anxiously, she thought about how she could create some additional income.

Years before, in wealthier times, Sophie had loaned a large sum of money to a friend, who was paying it back on an installment plan. For the past three years, this person had been making payments of $500 per month. In a flash, Sophie saw that this could be a source of additional revenue. She started to visualize the friend writing a check for $2,000 instead of $500. Every day for the next two weeks, Sophie said her affirmations, believed in her abundance, and visualized her friend writing a check to her for $2,000.

The check arrived. Sophie looked at the envelope, and held her breath as she tore it open. And there in her hands was a check for exactly $2,000.

And how much money do you want? Are you willing to believe it and affirm it daily? It’s been said that faith can move mountains. It can move money, too.

Today’s Affirmation:
“I now receive large sums of money just for being me!” (Contributed by Christiane Schull) 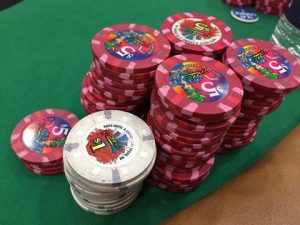 Friday, April 15, 2011 was Black Friday for poker players in the United States, as the Department of Justice moved to shut down online poker sites Pokerstars, Full Tilt, Ultimate Bet and Absolute Poker to US players, and arrest the owners on charges of bank fraud, money-laundering, and illegal gambling offences.

I. Nelson Rose, professor of law at Whittier Law School (www.gamblingandthelaw.com) writes “The Unlawful Internet Gambling Enforcement Act of 2006 was rammed through Congress by the Republican leadership in the final minutes before the election period recess. According to Sen. Frank R. Lautenberg (D- NJ), no one on the Senate-House Conference Committee had even seen the final language of the bill. The Act is title VIII of a completely unrelated bill, the Safe Port Act, HR 4954, dealing with port security, which was deemed critical to the national security and due to pass.”

Whether or not you believe poker is a game of skill, or approve of gambling in any of its forms, the fact that a small group of our elected representatives can attach a rider to a bill about national security that is totally unrelated to it, that most of our elected officials hadn’t even read, that being signed into law affects the livelihood and freedom to engage in online activities of all Americans, makes me very angry.

The law essentially made it illegal for banks to process fund transfers by credit card, check or money order sent from US citizens to any online gambling entity. It did not make it illegal for US citizens to play online – it just made it really difficult to transfer money in and out. As the sites figured out creative ways to enable players to send and withdraw funds, they ran afoul of this law, based on archaic laws on our books about wire fraud and gambling.

Something is very wrong with our system of government when a law can be passed in this manner, and sprung on an unsuspecting public. Although I don’t play poker online myself, many of my poker-playing friends do, and these most popular poker sites immediately closed their sites to US players, leaving them with no recourse and without access to their deposited funds. It spread shockwaves through the poker community, many of whom are professional or semi-professional players who make their living from this activity.

The United States has budget problems. There are billions of dollars generated by internet gambling. I am sure there is a lot of backroom jockeying going on, as our politicians figure out how to regulate and tax this activity. I am in favor of online gambling being regulated and taxed, as is every other business. Let’s get those tax dollars into our coffers. But passing a law in the dark, disabling US citizens’ ability to partake in activities of their choice, and using that to crack down on business owners as a way of enforcing taxation, is just an ugly way of making that happen.

When this happened I predicted: “It will be interesting to see how this all plays out. Brick-and-mortar casinos will be full. Televised poker will disappear, as the online gambling sites are the major source of advertising dollars for these programs. And a lot of US online poker players will be moving to foreign countries, where they will be free to play as they wish. Isn’t that ironic?”

I was right. Seen any poker on TV lately? The only show we regularly see anymore is the main event of the World Series of Poker in the summer. But they used to televise many events – now they only do one.

I was wrong on one count: brick-and-mortar casinos are not full. The market started disappearing because when the poker TV show disappeared, so did all TV advertising for any kind of poker anywhere. So card rooms lost a lot of business – even before the pandemic. Wonder what will happen next?