Back in the seventies, my sister, Jane, went on the game show Password. She was their all-time champ, reigning for a total of nine days. In those days, big money was a few hundred dollars, and she made $5,000! The whole family celebrated and loved watching one of our own have her fifteen minutes of fame and fortune on television.

Well, I wanted to do it, too. I watched the show daily for several months, practiced with my sister, and then went down to the Password audition—and yes! I was selected to be on the show. I arrived at the television studio, heart-thumping and dollar signs shining before my eyes…and then, I didn’t win. Boo, hiss. The agony of defeat instead of the thrill of victory.

By now, you must have figured out that I am a proponent of the “If at first you don’t succeed, keep on trucking until you do” school. So I made a few other non-noteworthy attempts at game show stardom, then in 1985, was selected to appear on Tic-Tac-Dough. This was my kind of show: Play tic-tac-toe by answering fairly easy, general questions and win money.

And I won! I was on the show a total of three days. They filmed five shows a day, so you had to bring changes of clothes so it looked like you were coming back on a different day. By the filming of the third show, my brain wouldn’t work any more, and I was out of the show after missing the question, “What was the name of the TV show starring Michael Landon in which he played an angel?” Oooh, it’s on the tip of my tongue, something-way, I think, I know Stairway to the Stars? Nope. Highway to Heaven. My short reign as champion was over.

For my three days’ work, I took home a refrigerator, a stove, a typewriter, a trip to Hong Kong, $5,000 cash and an aroma-therapy record player device—about $10,800 worth of cash and prizes. I was delighted. Another goal accomplished!

What’s the lesson in this story and how can you apply it in your own life? There are always many layers in these stories. Here’s a few to get you started:

Look for opportunities to make extra money and have fun.
Step outside your comfort zone and take a risk.
Study the winners and see how they do it.
Keep on truckin’.
Life is a game show.

Today’s Affirmation:
“I am a winner in the Game of Life!” 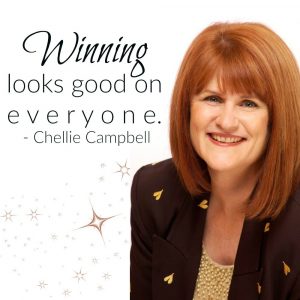 One of the participants in my Financial Stress Reduction teleclass wrote me a very interesting note about the upside and downsides being positive and upbeat, especially when you’re doing really well and others around you are not. Here’s what she asked:

“Really enjoying your class so far! I loved today’s topic of managing time and money. Perhaps I need more than one week’s contemplation on this! 😉

“Anyway, I have some general thoughts I wanted to run by you. My husband and I recently had an interesting discussion on making money and having money. We are by no means really wealthy, but we are comfortable and grateful for that. We live in a nice house and have nice things and take at least one nice vacation a year. We make more money than our parents and most of our friends. And over the last year, I’ve begun to feel a little uncomfortable in this area! …I want to be humble and don’t want to brag. But I also don’t want to act fake by being careful what I say so as not to be “too positive” or whatever.

“In general, I am a positive person, but I worry that I sometimes come off as bragging, when I’m just being optimistic- or even just honest- maybe things are going great!

“So, my question is- how do I strike a balance with all this? How do I feel ok about doing well and not seem like a jerk to others who maybe aren’t doing as ok as me/us? How do I stay positive when really that’s not what others want to hear?

“I feel like I could really skyrocket my wealth, happiness and all other positive things in my life. That is IF I don’t limit myself. Have you ever felt this way? I’ll look forward to your thoughts on all this.”

I could relate to her dilemma, can you? Here’s my take on this for all of you:

“Ah, I understand what you’re saying, and you’re right – it’s a bit of a challenge to balance feeling upbeat and positive and not coming across with too much good cheer when others are suffering.

“What naturally happens as some people rise in status, popularity, and financial success is that some of the old friends whose circumstances aren’t as rich or happy will drop away, and others who are in your same circumstances will appear. You will naturally attract and gravitate to more successful dolphins.

“When people become richer and more successful, some people will complain that they got “too uppity” or “too big for their britches” and don’t talk to their old friends anymore. But that isn’t the reason their associations change. It’s because people in poorer situations sometimes start acting like “angry tuna”. They feel some anger, resentment, and jealousy towards people who are doing better and start expressing that – and that’s what drives the successful dolphins away. And you can’t ask your poorer friends to go with you to Europe for 3 weeks, eh? You’ll find richer circles of dolphins who can and will.

“Being open and vulnerable doesn’t mean you have to be in dire straits or suffering – it means being compassionate towards others and giving support, advice, and help where you can by sharing when you also had a difficulty and what you did to overcome it. That’s what I do in my workshops, see? It’s not that I’m suffering now, but that I have had my own problems and have worked to overcome them. Some of your friends who aren’t doing so well will want to know how to improve and are willing to do the work, and they will stay close in your circle. Others won’t. It’s a natural attrition. No one’s life is perfect, you will always have challenges and new lessons to learn on your life’s path. The wisdom of when to share what and with whom is a lifelong study that we refine as we age in years and experience.

“Don’t squelch yourself. You get to be happy, joyful, and rich! You can be low key about it with family and friends that you know are having hard times, but be sure to find those inner circle friends who are also doing well with whom you can share all the glories! You’re fabulous and you deserve it!!”

I have had my own problems and have worked to overcome them.