Ten Stupid Things People Do to Mess up Their Money

“Money in the bank is like toothpaste in the tube. Easy to take out, hard to put back.”—Earl Wilson

“Chellie, call this producer right now!” Felicia said. A producer named Lori was looking for a “money expert” for the Dr. Laura Show, and Felicia had told them about me.

I thanked her profusely, called Lori, and faxed her my information. An hour later, Lori called me back and said yes, they wanted to have me on the show. Great! Then she said, “Think up something fun to do with Dr. Laura for six minutes. Call me back at six o’clock tonight.”

It was noon, and I was leaving for Las Vegas at two o’clock with four friends for our annual Super Bowl weekend trip. This was a short-notice request, but at least I had more than the thirty-second elevator opportunity! I did some quick research on Dr. Laura Schlessinger on the Internet, and discovered she had written two best-selling books, Ten Stupid Things Women Do To Mess Up Their Lives, followed by Ten Stupid Things Men Do To Mess Up Their Lives. So I thought I could do a take-off on that: “Ten Stupid Things People Do To Mess Up Their Money.” I started writing on the plane. After I checked into the Mirage Hotel and joined a game in the poker room, I asked for contributions from my friends and the other players. Here’s what we came up with:

I called Lori on time, told her my idea and read her the list. She laughed, Dr. Laura approved it, and I was scheduled to make my national television talk show debut.

I reached several conclusions from this adventure: first, you never know when your ship is going to come in, so it pays to stay flexible; second, it’s not who you know, it’s who knows you, so be sure you’re networking; and finally, help is available all around you, wherever you happen to be. All you have to do is ask.

Today’s Affirmation:
“I have control and power over my life and my money!” 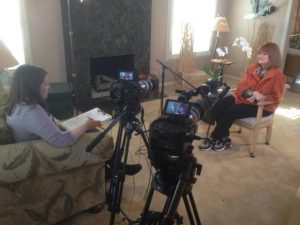 I have to sheepishly admit that when Felicia first suggested I call the Dr. Laura producer, I “yeah, butted” her. “Oh, I’m not ready for that yet,” I said. “My book isn’t going to come out until next year.” Felicia was a little impatient with me and bottom-lined me with, “And being on television would be bad for you because…?”

Well, I had no answer for that, so I made the call, even though it felt outside my comfort zone. Don’t we all do that? Drag our feet and “yeah, but” and find reasons NOT to act? I guess it’s just that hard for human beings to break from their routine…

Not only did I have fun doing the show, got great experience, a good credit for my resume, and a wonderful clip for my video reel, but I got to write this page for inclusion in the book. And that paid off down the line when my book did come out, and the producer of the Dr. Laura radio show contacted me about having my book selected as one of Dr. Laura’s Book-of-the-Week selections.

Dr. Laura had been bemoaning the fact that several of the books she selected as her choices hadn’t quoted her, and that gave Michelle the ability to open the door for my book, “Here’s a fabulous book that devotes two pages to you.”

Dr. Laura enjoyed these pages and the book, and “The Wealthy Spirit” was chosen as a Book-of-the-Week and gave me a 2-minute testimonial on her show that has 10 million listeners!

Help is available all around you, wherever you happen to be. All you have to do is ask.