“I will not participate in a sport where there is an ambulance parked at the bottom of the hill.”—Erma Bombeck

I had always wanted to learn to ski, and when one of my clients offered me the use of his condo at Mammoth Mountain, I jumped at the chance. When I got there, I signed up for ski school. All went fine for the first couple of days. I learned the basic “plow” stance and could remain on my feet on the bunny slopes. But I was excited as the third day dawned bright and crisp, for this was the day the ski class was going up the mountain. There were about twenty-five students in the class and we all watched intently as the instructor showed us how to do turns. I was at the end of the line as we practiced our turns skiing down the slope concentrating very hard, eyes on my skis. Finally, I made it to the bottom of the slope, and I looked up proudly.

No one was there. The entire class had disappeared. I was at an intersection of eight trails and I had no idea which way they had gone. I had no map. Shocked and scared, I took my skis off, sat down in the snow and burst into tears, crying and feeling sorry for myself for about ten minutes. Then I thought, “Well, this isn’t going to get me down the mountain.” So I picked a trail and skied down it, only to find that at the bottom, there was nothing but another chair lift. Panic set in—the last thing I wanted to do was go back up the mountain! I needed help. I looked at all the people in line, picked out a sympathetic young man, told him my sad story and begged for assistance. He was terrific and coached me up the chair lift and skiing down the hill to the main ski lodge.

As I waved goodbye to my hero, back safe and sound at the lodge, all of my fear turned into rage. I marched into the ski school and complained bitterly about having been lost on the mountain by their instructor. The nice young man at the desk didn’t miss a beat and offered me a free class the next day. (Well, what else was I going to do for a week at a ski resort?)

I arrived at ski school the next day as usual—with one difference. Now I wore a big, bright pink hat. I introduced myself to the instructor and told him that the last instructor had lost me on the mountain. I said, “Do you see this pink hat? Whatever happens today, I want you to make sure that this pink hat is with you every step of the way.” And he did, and I learned to ski.

There are several morals to this story:

Today’s Affirmation:
“Good things happen to me every day!” 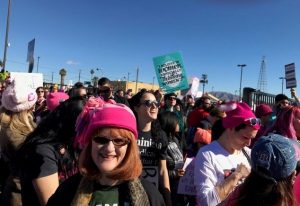 The skiing thing didn’t last. It was just a little too challenging for someone who’s afraid of heights and doesn’t like to be cold, see?

Some people like that kind of a challenge – it gets the adrenaline pumping. I don’t like my adrenaline pumping because of fear of death. There are better ways, you know, like winning a poker tournament. I might lose the tournament, but Wild Bill Hickock notwithstanding, I’m pretty sure I’m not gonna die as a result.

I’ve often wondered what the big charge is about mountain climbing. I saw the movie “Into Thin Air” and read the book, too. Kept a big blanket wrapped around me, drank hot coffee, and ate lots of munchies the entire time. (“One Day in the Life of Ivan Denisovich” affected me the same way.) The down side of mountain climbing is death, okay? Best case scenario is you’re going to be really cold and oxygen-starved. I guess the view is terrific, but I can rent a movie to see that, and be curled up and warm on my couch at the same time.

I watched a documentary about a young boy whose father had been one of those extreme skiers who ski where no one else goes, on cliffs at 55º angles. (I don’t remember the name of this movie, but you can similarly chill your blood watching “Steep”.) His father had been killed skiing on a mountain in France, and the boy wanted to ski it, too, as a memorial testimonial to his dad. He had a lot of people helping and training him, but bottom line, he was undertaking a very grave risk (pun intended).

What was his mother thinking??

Crying about failures won’t get you where you want to go.