Someone asked me yesterday who my role models were when was growing up. I don’t remember many role models—rather I remember a lack of them. When I was in high school, it seemed most girls gravitated toward (or were led to) becoming a teacher, nurse, or mother. None of this looked too thrilling to me. Mom took care of what I call the “5 Cs”: cleaning, chauffeuring, cooking, and child care. Children are wonderful and caring for them important, but it just wasn’t the right job description for me.

But in the field of “actress,” I found women I could relate to and aspire to be like. Strong-willed, determined women, carving out a place at the top of the world, like Bette Davis, Rosalind Russell, Katharine Hepburn. I loved the musical stars: Jeannette MacDonald, Ginger Rogers, and Cyd Charisse. I watched and envied them all on television, dreaming of following in their glamorous footsteps.

Nowadays, role models for women abound. Women are doctors, attorneys, politicians, psychiatrists, accountants; they run major corporations and own their own businesses. I watched the barriers come crashing down: Muriel Siebert was the first woman to buy a seat on the stock exchange. Madeline Albright was the first woman Secretary of State. Sally Ride was the first woman in space. Sherry Lansing was the first woman to run a movie studio. Whatever career you aspire to, there are many wonderful women who have led the way for you to work at the top of that profession. Seek them out, listen to their stories, follow in their pathways. Role models and mentors abound. Whatever they have done, you can do.

There remains a lot more to do. Women make up over 50 percent of the population, but women in the top bastions of power are rare. On average, women make less money in the marketplace than men do. Only 1 percent of the Fortune 500 CEO positions are held by women. Women over forty are rarely featured in movies or star in television series. Why do we have to get off the stage at forty when we have another forty years to live? I want some wrinkled role models in my magazines, newspapers, and films. I want women role models who are successful yet not burnt out from working too many hours; loving wives and mothers who are not expected to do all the nurturing alone. I want to see women respected and admired for their intellectual gifts, not just their beautiful bodies—and I want more shapes and sizes recognized as beautiful. I want more women running things.

There is the problem—can you be part of the solution? I challenge you to make this happen. Be a role model: Give a young girl someone to look up to, assist a female co-worker, hire that “older” candidate because she has more experience, promote feelings of sisterhood among all women whether they work in an office or in their home, and, most important of all, realize your dreams and achieve success!

Today’s Affirmation:
“I empower every person I meet today to rise to their full potential!” 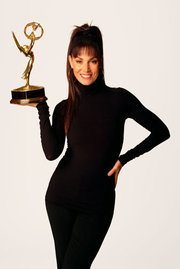 Read this from a very interesting thread on Facebook:

“I like to watch the bios on “Wealth and Power” on Biography Channel. Seems to be trend of the “successful” people having a terrible home life. Kids hated them and had a string of failed marriages. I think Sam Walton and Bill Gates were the only ones that did not. They should have all talked with Iacocca first.”

I commented back that this is a common thought that pervades our society – that rich and successful people have terrible home lives, bad relationships, no time to enjoy their money because they’re always working, etc. An opinion poll taken in 2000 showed that a majority of people believed that “lots of money makes people greedy and insensitive.”

I want to remind all my dolphins reading this blog that the media does not exist to give you a fair and balanced viewpoint of what is true. It exists to sell advertising. The famous newspaper adage is that “if it bleeds, it leads” which means that murder, riots, accidents, suicides, beatings, etc. get priority space because these kinds of dramatic incidents sell more newspapers and attract more television viewers.

Lots of people I know and have read about are “rich and successful”, happy, and yes, love their families, too! We get a skewed view from the media because they love the dysfunctional stories so much because they sell better.

It isn’t going to serve your wealth consciousness and prosperity goals to believe that being rich will make you arrogant and rude and ignore your loved ones, will it? Research stories of rich, happy, successful people with wonderful, loving families. Collect evidence for success, prosperity, and love – you can be both spiritually and materially rich – they are not mutually exclusive!

Now, we all have our prejudices and perspectives, and a woman reading my book came to this page and wrote me about a glaring omission. So here is her letter – she has a great point, don’t you think? I’d love to hear from you if you had a positive role model (or are one!) for people in blue collar or non-traditional occupations:

I just read this through for the second time. I love the thrust of the message, AND I can’t go to bed without pointing out the glaring reality that the white collar bias in it not only dominates, but it is exclusive in the literal sense of the word. My sister busted her proverbial ass as a union apprentice, then journeywoman electrician before going on to learn industrial electronics on a vehicle assembly line maintaining robot workers. In the late seventies I found the shipping industry and worked there for nearly ten years, most of them as an able-bodied seaman on deck, and they were lonely years at sea. I LOVED being on the ocean but women were few and far between. When a laundry list of potential career paths presents itself to young women and is very clearly only elevating white collar careers it tells them in no uncertain terms that working in the trades, besides being unglamorous, is not something to be proud of aspiring to. I would love to see a more inclusive reality in that post. While screen-acting can undoubtedly be grueling, it is seen as a romantic and privileged pursuit.

Cheri Hoffer
www.CanineCampovers.com Where your beloved dog boards as a family member in the private home of one of OUR state-licensed sitters on the Colorado Front Range.

Realize your dreams and achieve success.