“There’s a four-letter word you must use when you get rejected…NEXT!”—Jack Canfield

I remember that Jack Nicholson, upon accepting his Academy Award for Best Actor in One Flew Over the Cuckoo’s Nest, said something like, “I dedicate this to my agent—who told me ten years ago I had no business being a serious actor.”

All successful people have stories like this to tell. Albert Einstein failed math. Winston Churchill failed English. Failure is just another step on the road to success. If you get rejected by someone, they just aren’t “Your People!” Here are some of the rejection experiences of very famous, successful people:

Chicken Soup for the Soul was rejected by thirty-three New York publishers. The best-selling franchise has now sold over 50 million books.

John Grisham’s first novel, A Time to Kill, was turned down by more than thirty agents and fifteen publishers. There are now more than sixty million copies of his books in print.

Lust for Life by Irving Stone, a novel that later became a motion picture starring Kirk Douglas as Vincent Van Gogh was described by an editor as “A long, dull novel about an artist.”

Alexander Graham Bell’s banker said to him, “Get that toy out of my office immediately.”

“Playing the guitar is all very well, John, but you’ll never make a living at it,” said John Lennon’s Aunt Mimi. The Beatles Anthology told how some of his fans made a sign of her quote and sent it to her. She hung it up on display—in the house he bought her with the money he made from playing the guitar.

These are all nay sayings from the nay sayers. They are to be pitied, not believed.

Today’s Affirmation:
“I am successful, financially, and spiritually, in everything I do!” 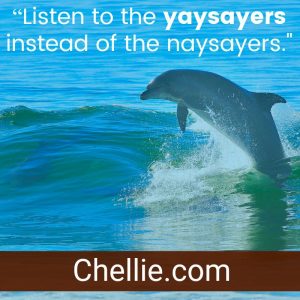 On this same topic, I wrote this for “From Worry to Wealthy”:

“Perseverance is a great element of success. If you only knock long enough and loud enough at the gate, you are sure to wake up somebody.—Henry Wadsworth Longfellow

Remember Dorothy in the Wizard of Oz knocking on the door of the Emerald City, begging to be allowed in? She was in a strange land among strangers, and every step she took was outside her comfort zone. When you’re Dorothy and your goal is to get home, you are willing to take any path to get there. Your goal is all that matters.

This is what it takes to be successful at anything: passion, determination, and single-minded devotedness to purpose. Determination is like an iron fist holding up your spine. If the Emerald City holds the map to your way home, you will not be dissuaded from your dream because there’s a wicked witch on the road, or flying monkeys overhead, or a guard at the gate who denies you entrance. You will never be one of those small people who are content to stay forever in Munchkinland. You will get to the Emerald City or die on the road to the Emerald City. And because you keep on moving down the road, life helps you out by sending you a Glinda, a Tin Man, a Scarecrow, and a Lion to give you encouragement and help you succeed.

Failure is just another step on the road to success.