“The moment one definitely commits oneself, then Providence moves, too. All sorts of things occur to help one that would never have otherwise occurred.”—Johann Wolfgang Von Goethe

Years ago, when I was working as the office manager for a small company, I wanted to buy a house with my fiancé. We didn’t have any money saved for a down payment, and we didn’t know how we could do it, but we set the goal anyway.

Right after that, the company I worked for sponsored a class called Hypmovation—it was a combination of self-hypnosis and motivation. The goal-getting idea I got from them was to write a contract with yourself, identifying specifically what you wanted and by when. You were to describe in the contract the actions you would take to achieve the goal and then sign and date it. After that, you were to visualize the goal as a reality, and follow through by doing the actions you said you would do to accomplish the goal. I wrote that I would open a special savings account labeled “House Account” and save a specific amount of money every week plus any raises I received. I expected that it would take two years to save enough for a down payment on a house.

It only took six months. A surprising opportunity arrived that made home ownership a reality soon after declaring the goal. My fiancé and I were friends with another couple whose home had appreciated substantially in value. At dinner one night, they were talking about how they would like to buy more property, perhaps with another couple. Ka-ching! We told them that we were that “other couple” and the house hunt was on.

I had never thought about buying a house with partners. The idea presented itself because we had set a goal and were taking positive action to achieve it. Every day, we thought positive thoughts, visualizing owning our own home. Then we took action: We looked at real estate, talked to people, and educated ourselves. We counted our money, adding up the dollars that we saved every week in our “House Account.” I got a raise…and then I got a house! I only owned 25 percent of my first home, but it was a start. When my fiancé and I broke up, I bought out his 25 percent interest in the property. When my partners and I sold it, I had a sizable down payment with which to buy a house on my own.

An attorney I knew wanted to own his own home. The home he wanted was in the $500,000 price range. He refused to settle for something smaller in order to get started. He didn’t want partners. He didn’t want a fixer-upper or a more distant location. He had “yeah, buts” for every suggestion.

That was fifteen years ago. He still doesn’t own a home.

Today’s Affirmation:
“I am happily creating my own rich rewards!” 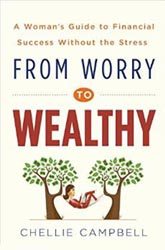 In teaching my Financial Stress Reduction® Workshops, I’ve seen women—and men, too—struggle with pricing. If you don’t price your products and services correctly, you won’t ever make the money you want – and deserve – to make. Everyone had anxiety about asking for money – from negotiating a starting salary to pricing their products and services if they were in business for themselves.

I studied the research in the book “Women Don’t Ask: the High Cost of Avoiding Negotiation and Positive Strategies for Change” by Linda Babcock and Sara Laschever, investigating the reasons why women still make on 77 cents to a man’s dollar – even when they are just as skilled, just as talented, and have the same qualifications and credentials in every way.

Linda is currently Professor of Economics at Carnegie Mellon University. A few years ago, when she was director of the Ph.D. program at her school, a delegation of women graduate students came to her office. Many of the male graduate students were teaching courses of their own, the women explained, while most of the female graduate students had been assigned to work as teaching assistants to regular faculty. Linda agreed that this didn’t sound fair, and that afternoon she asked the associate dean who handled teaching assignments about the women’s complaint. She received a simple answer: “I try to find teaching opportunities for any student who approaches me with a good idea for a course, the ability to teach and a reasonable offer about what it will cost,” he explained. ‘More men ask. The women just don’t ask.”

This incident suggested to her a more pervasive problem. Could it be that women don’t get more of the things they want in life because they don’t ask for them?

If you don’t price your products and services correctly, you won’t ever make the money you want – and deserve – to make.