“The man who removes a mountain begins by carrying away small stones.”—Chinese Proverb

The process of actualizing your desires is simple:

Visualizing having the goal is a step that is most important to master. Pick something small and easy to practice on at first. You could visualize getting a cab quickly and easily, or getting good news in the mail. Since I live in Los Angeles, where it sometimes seems there are a billion cars, I tell people to practice by manifesting a parking space at a busy shopping mall, theater, etc. The trick to getting parking spaces is to visualize the empty space instead of the crowd of cars.

My mother called me one day and she was very excited. She told me that she had always had trouble parking at the country club on the days she played golf—it was always very crowded. But this particular day, she remembered my stories of manifesting parking spaces and decided to try it. “I drove right up to the front entrance of the club, visualizing an empty space, and just as I arrived, a car pulled out of a space right in front of me! Chellie, this stuff really works!”

She reminded me of a date I had to go to the movies. As we drove to the shopping mall where the theater was located, Bill said to me, “The only problem with going to this theater is that the parking is always so terrible. It’s much too crowded there.”

He looked at me very strangely and I could see him thinking about what kind of weirdo had he gotten mixed up with. Soon after, we pulled into the mall parking lot and he slammed on the brakes and stared. The parking lot was practically empty! Bill slowly turned and looked at me with his eyes wide and his mouth open.

I said, “Oops. Sorry. I guess I overdid it.” It was a very funny moment.

Practice visualizing what you want instead of what you don’t want. See if you can clear a parking lot.

Today’s Affirmation:
“I visualize and create marvels in my life!” 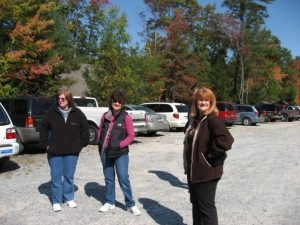 My friends and I went to see a production of “Late Nite Catechism” written by Vicki Quade and Maripat Donovan. It was hilarious. Maripat Donovan plays a nun, and you, the audience members, are part of Sister’s class. She takes you back to the days of the Latin Mass, meatless Fridays, and if you went to Catholic school, reminds you about that good old ruler across the knuckles.

The friends I went with are Jewish, and I was raised a Methodist, but we all howled with laughter just the same. In this one-woman show, Sister interacts with the audience every step of the way. At one point, some people arrived late and were making their way to their seats.

“Sorry,” said the man, surprised to be spoken to.

“Why were you late?” she asked.

“We couldn’t find a place to park,” he answered.

“Aha. Parking,” she acknowledged, then turned to the audience. “Does anyone remember the prayer for parking?”

Several hands were raised, and she called on a woman in the front row. “Stand up and say it for this gentleman, please.”

Help me find a parking space.”

Prayer: another way of manifesting.