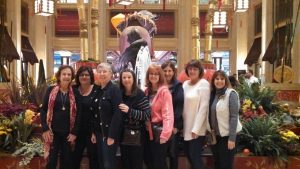 I was on vacation for a week in June and it was terrific! Every year in June or July, my friends in my home poker game and I go to Las Vegas, play poker, have fancy dinners, and all around good fun. My sisters, Jane and Carole, and their group of 13 friends have a Vegas vacation in July, too, and they often go the same weekend we do. And then all the casinos have ladies tournaments culminating at the Rio Hotel with the World Series of Poker Ladies Event, so all my women poker friends gather from all over the world to play in that. It’s just a ball hanging out with all my buddies in one place for an entire week!

This year, well, it was my turn to contribute to the poker community LOL. But win or lose, it’s all fun! Poker players have a saying, “The next best thing to playing poker and winning is playing poker and losing.” Hee.

Do you have a goal, a dream, a vision of the work you want to do in the world? Do you love it enough to devote this kind of energy, hope, enthusiasm, persistence, and dedication to it?