“We jump off buildings and make our wings on the way down.”—Ray Bradbury

It was 1990, and the recession was in full swing in California. I had survived in business one year after losing my biggest customer and most of my clients and friends knew about it. Now they were afraid as business prospects diminished, money got tighter and “lean and mean” became the business order of the day. I started getting a flood of calls that sounded like this: “Chellie, things are getting difficult. When you had your problems last year, what did you do? Somehow you survived a major downturn in your business—maybe I can, too.”

Jumping in to help, I dispensed a lot of free advice over lunch. When three people in the same week told me I should teach a class in these principles, the Financial Stress Reduction Workshop was born. Or rather, the flier for the workshop was born.

One of the most important ideas I had gleaned through my own disaster recovery program was this: “Do What Makes Money First.” I couldn’t afford to spend an inordinate amount of time and money creating and advertising a workshop that wasn’t going to produce income for me and my company. I needed to make sure it would sell. So, I wrote a flier advertising the benefits of the workshop, cut and pasted some graphics on it, and mailed it out to my entire mailing list.

No one called. But by this time, I was committed to the idea of my workshop, had visualized how it could help people and I wanted to do it. Unwilling to give up, I got out the mailing list and started making phone calls to the likely suspects I thought would be interested in this class. Over the phone, with enthusiasm and excitement, I promoted the benefits of the class and enrolled twelve people within two weeks. (These are my personal examples of the principles “Sending Out Ships” and “The Money is in the Phone.”)

Soon, I had twelve people destined to show up for class. I had sent out the ships, the ships had come in and were due to be unloaded in three weeks. Then, and only then, I sat down to write the workshop.

Years later, I met a woman who did it the other way around. She invested $13,000 in four-color brochures, mailing lists and advertisements for her weekend seminar. Breathless with anticipation, she waited for the phone to ring and for enrollments to arrive in the mail. She never made a phone call herself. When only two people signed up for her workshop, she canceled it and folded her business—a $13,000 loss.

Research your idea to make sure people want it and that you can sell it before investing money in it.

Today’s Affirmation:
“People are clamoring to pay me for my wonderful services!” 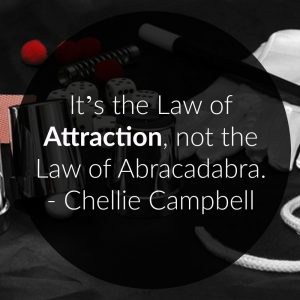 So how many of you waited until the night before it was due to write the term paper for class? Yep, me, too. This story is an example of that. I get inspired by deadlines.

My usual mode of writing papers when I was in college was to do a lot of ruminating about the subject while I was walking to class. I had pieces of paper in my coat pocket, and when I happened on a word or phrase or idea that worked, I would scribble it on one of the pieces. My pockets got rather full as the deadline neared.

Then a day or two or even the night before the paper was due, I’d pull out all the pieces of paper and organize them on the desk. I would take each bunch that represented a paragraph and think about it until I had it clear in my head, and then type the complete paragraph. Then I’d repeat that process with the next group of bits.

This was back in the day of manual typewriters and no easy erasing system, so if you made a change in the beginning of the paper, you’d have to type the entire paper over again. Can you imagine?? I hated to do that kind of repetitious grunt work, so I made sure to have everything outlined ahead of time so that I only had to type one draft and turn it in. Copies required onion skin and carbon paper. Yes, it was the Dark Ages.

Hee. This sounds like my version of “In my day, we had to walk two miles in the snow to get to school…”

But let me remember in this moment to passionately Thank God for this wonderful age with live in now, with computers that allow changes in the beginning of the document, easy and effortless correction of errors and misspellings (Spellcheck rocks!), and attached printers that can print multiple copies on demand at a touch of a button.

We live in a truly magical age.