“Magic Money” and the “PDQ” Plan

“Bills travel through the mail at twice the speed of checks.”—Unknown

Personal bankruptcies soared in the late 90s and credit card debt was at an all-time high. Consumer Credit Counselors declared that it was not unusual for their clients to have 40-60 credit cards. They also reported that the average per family debt, in credit cards and cards, was $52,000. Although these statistics might change somewhat from year to year, they don’t change enough.

Too much easy credit coupled with too small minimum monthly payments keeps too many people slaves to their debt. Make a decision now to become debt free! It may take some time, but a commitment today to the “PDQ” (Pay Debts Quick) Plan will have your debt unloaded sooner than you think. There is a freedom and self-satisfaction that comes with acting on your plan that makes you walk, talk, look, act, think, and be richer!

Look at your current budget and see what amount of money you can dedicate each month to paying off debt. For example, let’s assume that you have ten credit cards and can afford $250 per month towards paying them off. So you pay $25 to each credit card every month. Eventually, one of the cards will get paid off and most people will continue to send $25 to the other nine cards. But that’s reducing your debt repayment commitment to only $225 instead of $250. What happens to the other $25? It disappears. (Eating up unallocated money is the actual purpose of the “black holes” in the universe. There is one in every checkbook, wallet, and credit card.)

A magical thing happens next. Out of the integrity of your commitment and follow through, unexpected money starts appearing in your life. I call it “Magic Money.” You feel more prosperous, more confident, and like a good money manager because you have taken control of your finances. Money flows to people who think like this. And always use part of your “Magic Money” to pay down your debt even further—and faster!

Today’s Affirmation:
“I am a creative money generator!” 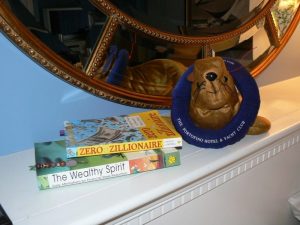 A friend and client of mine named Jack wrote me to say he was happy to report that he had been closing deals left and right after a long drought in the hiring biz. Then he said,

“I also noticed something interesting: When I finally had money come in after being on ultra-low budget for so long, my inclination was to SPEND SPEND SPEND! as I was so TIRED of being frugal. While I did take some money for me, I had to resist the urge to spend like a drunken sailor. So now I’m in medium-budget, happily paying down my past-due bills.”

He thought this would make a good blog topic, and I totally agree!

It is critical that when your circumstances improve, you transition carefully from low to medium and then medium to high budget. As the money starts flowing again, you want to have some “spree money” for you – it’s such a relief to be able to buy a few nice things for yourself, or go out for a great dinner or night on the town.

Just be sure that you take care of your budget as well as yourself. You can only really enjoy spending money when you feel secure in your financial plan, that you’ve got all the bases covered. Make some considered decisions about paying off debts and saving for the future as well as having fun in the present.

When you can do all three successfully, you have achieved Money Mastery!

There is a freedom and self-satisfaction that comes with acting on your plan that makes you walk, talk, look, act, think, and be richer!