When I attended a financial workshop years ago, we played a game called “It pays to be on time.” We were charged a dollar a minute for every minute we were late to class, to a maximum of ten dollars. You should have heard the arguments that went on each class about paying those fines! A veritable cornucopia of “Yeah, buts.”

“Yeah, but there was an accident on the freeway,” “Yeah, but my car broke down,” “Yeah, but my biggest client called with a problem and I had to help him,” etc. The workshop cost eight hundred dollars, yet here we were spending the first fifteen-twenty minutes of each class arguing whether or not someone owed their fine of two dollars!

One evening during this workshop, I wasn’t feeling well and it was raining, so I made the choice not to go to class. The next week, as they read off the names of people who owed fines for being late, they ended with, “and Chellie Campbell, ten dollars.”

Surprised, I said, “I wasn’t late tonight!” and was told, “This is for last week when you didn’t show up.”

Hand on my hip, defensive attitude ready, I said, “Yeah, but I was sick!”

And before I got the word “sick” out of my mouth, I had a revelation. I often used getting sick as an excuse to cancel things when I had over-committed myself. Sometimes when I looked at my crowded calendar, I would plan in advance to call in sick to something. Then, by the power of suggestion, I would really get sick. This was a habit that needed to be broken!

I understood this lesson so powerfully in that moment that I paid the fine immediately with no further discussion. It was a cheap price to pay for a very significant life lesson.

Today’s Affirmation:
“Time is my friend and I am always on time.” 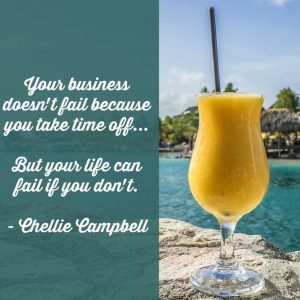 Isn’t it funny how the Late People are always late nearly exactly the same amount of time? I remember one of my mother’s friends was always one hour late. For everything. She would arrive flustered and hurried and very apologetic. But you could set your watch by the exactly one hour she would be late! So of course, my mom started telling her things started an hour earlier so that they would be on time…

I was so religiously on time that people always expected it of me. Once I was meeting my mother, my aunt Woodie, and my sisters for lunch at the Beverly Wilshire tea room, and somehow I ran late (traffic? I don’t remember). But I remember the looks of relief from all my family members when I rushed in 15 minutes after the appointed hour (this was in the Dark Ages BC – Before Cell phones).

Hee. Can people set their time by you?

If your ship sails and you’re not on it, the reasons why you missed it won’t put you on it.