Dad Had a Wonderful Life! 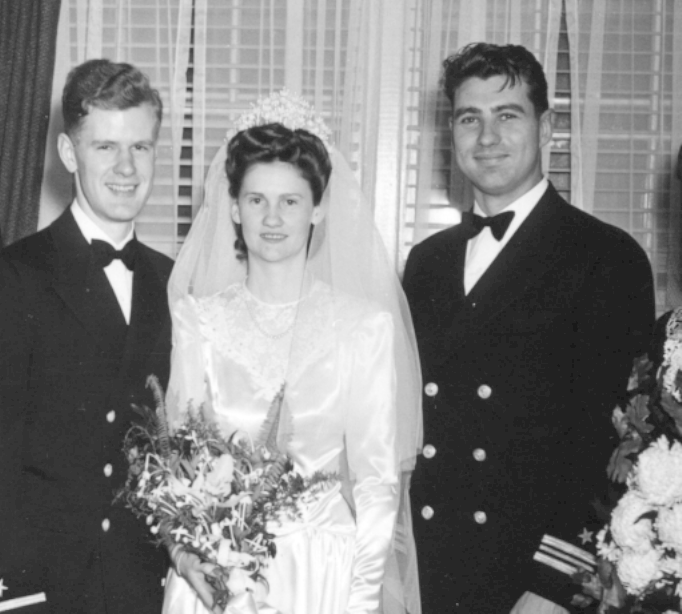 Yesterday morning, my wonderful father passed serenely into the next life.

He had a lovely Christmas holiday with the family and then started feeling poorly in January. We all thought it might be the flu, but he was losing weight and was abnormally tired. After many doctor visits and tests, the culprit was found.  Dad had bladder cancer, and it had rapidly progressed to stage four.  None of the standard treatments of chemotherapy, radiation, or surgery were recommended at that stage and at his age of 93.

Of course, we were all devastated — we were counting on him living to at least 100!  Dad said he didn’t want any heroic measures and decided to let nature take its course.  At home after the diagnosis, he said, “Well, let’s enjoy the sunshine!” and then quietly, “I’ll see Nell” referring to his beloved wife who had left us suddenly in May of 1989. Dad lived his final days with my sister Jane and her husband Dick in Camarillo with the caring and loving help of Vitas Hospice care.

Much sooner than we were prepared for, he left us to join with God and our loved ones on the other side. We had a wonderful day with him last Saturday, as the family gathered to celebrate his granddaughters’ Marissa and Lindsey’s birthdays. We circled his bedside and said our goodbyes, told him how much we loved and appreciated him. He said he hoped to see us all in the next life and that he loved us all very much. His last words were “I love you” spoken on Monday night. He had been diagnosed with cancer only 4 weeks before!

He slipped into a coma the next day, and Jane, Dick and the hospice nurses arranged 24-hour care. On Tuesday evening, feeling his time was near, Jane, Carole, Marissa, Lindsey, Katie, and I surrounded his bed and sang songs, told stories, laughed, hugged, and celebrated his life. We told him he was loved, he was safe, and he could let go to join his heavenly family. It was a magical evening and we all felt blessed by it.

Jane’s son Robert had been working in Texas and was the only one who had missed the family gathering. He flew in Wednesday to say goodbye to Dad. After Rob told him he loved him, Dad breathed a sigh that seemed to acknowledge Rob’s words, and we feel he was able to let go the next morning after that final goodbye had been said.

We spent yesterday making the arrangements at Rose Hills, where he will have his final resting place next to our beloved mother. When we were arranging for a minister, I told our counselor Sunny (perfect name!) that we had a wonderful minister they sent us from Unity church for mother’s services in 1989. “Do you remember his name?” Sunny asked. “Charles…um,” I said as I hesitated over his last name. “Murphy?” asked Sunny. “That’s it!” I replied, and she said that he was still one of their ministers and she would put in a request for him to be there for us at dad’s services. Isn’t that amazing? Charles is the one who told the beautiful ship story at my mother’s funeral – it’s on page 200 of “The Wealthy Spirit”.

Here is the obituary we have written for him:

Mark Campbell, 93, passed away peacefully in his sleep on the morning of May 9th of cancer. He was born in Seattle, WA, but lived most of his life in Whittier, CA where he and his loving wife, Nell, raised their three daughters.

Mark was a Merchant Marine, in the U.S. Naval Reserve, and served in World War II in the Pacific Theatre. He married the love of his life, Chellie LeNell Livingston, in November of 1943. After the war, received his B.A. and M.S. degrees in mechanical engineering from M.I.T.  Mark worked as an aerospace scientist for North American Aviation and Rockwell International from 1951 until his retirement in 1990. He worked on  missile and satellite navigation, an automatic fingerprint reader for the FBI, and hardware and software design for the navigation system of the Space Shuttle.

He played the clarinet in a Dixieland Band, loved golf, science fiction, and was becoming a dangerous poker player at family gatherings in his later years. He enjoyed membership in the Huntington Library, the Rockwell IMU group, the First Methodist Church of Whittier M&M group, and all his bridge groups.  A model father and family man, we will miss the twinkle in his eye, the laughter, the love and the joy that he brought to all who knew him.

The family would like to extend their sincere appreciation and thanks to Vitas Hospice, whose care-giving nurses and other helpers made his last days comfortable and eased the transition for all of the family. In lieu of flowers, please consider a donation to Vitas Foundation Hospice, 400 W. Ventura Blvd. #145, Camarillo, CA 93010.

A memorial service will be held at Rose Hills, 3888 Workman Mill Road, Whittier, CA on Thursday, May 16th at 11:00 am at the Memorial Chapel.  Interment will be private at 10:00 am, prior to the service.

Thank you for all your prayers, best wishes, and condolences. I know you join with us in mourning our loss and celebrating the wonderful life of our delightful dad.