“A man who both spends and saves money is the happiest man, because he has both enjoyments.”—Samuel Johnson

I suggest that everyone should have not just one, but three budgets, all with complicated names: Low, Medium, and High. You start with Medium Budget, which is the average income and expenses that you have right now. Then you create Low Budget—this is your bare- bones plan to reduce expenses if you have an unexpected financial problem such as a bill or a reduction in income. Then create a High Budget—this is your goal budget, how you’re going to spend the money you plan to make in the future. If you don’t have a plan for how you are going to spend it and save it, you won’t have a reason to make it, or if you do, you might fritter it away on low priority items. These flex-budgets will give you a written plan to follow, no matter what happens with your money. And each budget is only for one month.

People hate budgeting because they’re afraid of Low Budget. They think that’s the only budget there is and that they’ll be stuck with it forever. Who’d want that? No wonder people don’t do budgets. But Low Budget is never forever, it’s just for now. Anyone can go on Low Budget for a month! And when you’re on it, stay light-hearted about it and double up on your prosperity affirmations. Make it a game! See how much money you can avoid spending each day. Look for opportunities to trade or barter services. Clean out your home and have a garage sale. What work can you do part-time that would also bring in extra cash? What can you fix instead of buying new? Create new outfits to wear by mixing and matching separates in new ways. And each day you succeed in conserving your cash with creative ideas, congratulate yourself on your wisdom and money mastery.

The real fun is creating High Budget. This is your Prosperity Plan. Spend some time each day looking at it and feeling rich. What do you want to have and do when you’re on high budget? Go shopping and price compare for the best values. (Just because you have a lot of money doesn’t mean you have to spend it foolishly.) Get pictures and brochures of the things you really want and put them on your wall. Start a special savings plan for major purchases. Be specific: if you want a new car, what make, model, and color is it? What features and options does it have? Smile and feel the pleasure now as if you already owned it. Affirm your ability to create this abundance in your life. It won’t be long before it shows up!

Today’s Affirmation:
“I spend money wisely and happily, blessing myself and others.” 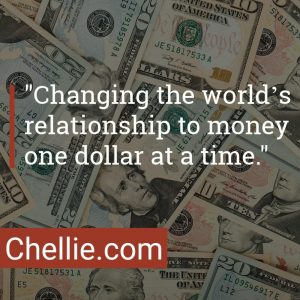 The first time I made a High Budget for myself, I was on it within four months. That’s the power that comes from giving yourself a goal and then motivating yourself to get it. High Budget is another positive affirmation of your success – it’s just one in numerical form.

You have to master the numbers. Not only to create the money you want, but to conserve and protect the money once you get it.

Several years ago, Oprah had a homeless man on her show along with two documentary film producers. The producers had placed a briefcase filled with $100,000 cash in a dumpster and waited for this homeless man to find it. They were doing a study to see how he would respond and if the money would change his life.

They offered him a financial advisor to help him set up a budget and teach him how to manage it, but he didn’t take them up on it. He got an apartment, furniture, television, car, and a girlfriend. He gave a lot of the money away to friends. He blew through all the money in about 6 months.

The money in the suitcase looked like untold riches when he had nothing. But when he upgraded his lifestyle, it ate up the money quickly. Before he knew it, the money was gone and he was back on the streets.

You have to have a plan to keep manifesting money!