“Debt is a trap which a man sets and baits himself, and then deliberately gets into.”—Josh Billings

This is the story of the new car I didn’t buy. At least, not right away….

I had weathered many financial storms, but the sun was shining now. My new business was booming. I was earning good money, saving regularly, and was on the road to becoming debt-free for the first time in my life. I did my positive affirmations daily and my “High Budget” was becoming a reality. Then I happened across a brand-new Lexus GS 300.

A brilliant, sparkling, gold, sporty model, I could picture my cute little red head breezing down the highway, arriving at business meetings looking and feeling rich and prosperous. I could afford it and it seemed like an appropriate reward for myself for all of my hard work. I started investigating, getting brochures and costs, and posted a picture of the car on the wall in front of my desk as part of my “Treasure Map.”

Then I read The Millionaire Next Door, by Thomas J. Stanley and William D. Danko. It was like someone threw a bucket of cold water on me. The authors show how the wealthy become “Over Accumulators of Wealth” (OAWs) by behaving differently than “Under Accumulators of Wealth” (UAWs). OAWs buy appreciating assets: they invest in things that will produce more income. UAWs spend too much of their income on depreciating assets: things that lose value over time.

I thought about what I was doing. I was about to follow the UAW pattern of spending money on something that was going to decrease in value rather than increase. Not only was I going to take on more debt in the form of an auto loan, but I was going to add a lot of attendant expenses such as increased auto registration fees, higher maintenance, and service charges. This is the UAW spending habit: to spend every increase in income on lifestyle.

Remembering the saying: “The definition of insanity is doing the same thing over and over, expecting different results,” I knew I needed to take new actions if I wanted to become an OAW. I wasn’t on “High Budget” yet. The Lexus could wait until the total expenses connected with its purchase was a smaller percentage of my disposable income. So instead of buying a new car, I bought shares of stock in a mutual fund, added cash to my money market account, and invested in an expansion of my business.

I kept the picture of that car on my wall for the next two years as a goal and as a reminder that I had the ability to change my behavior, plan my expenses wisely, and accumulate wealth instead of just appearing wealthy. I drive that car now with pride in my accomplishments instead of nervousness about the expense.

Today’s Affirmation:
“I deserve rich rewards because I do what it takes to earn them.” 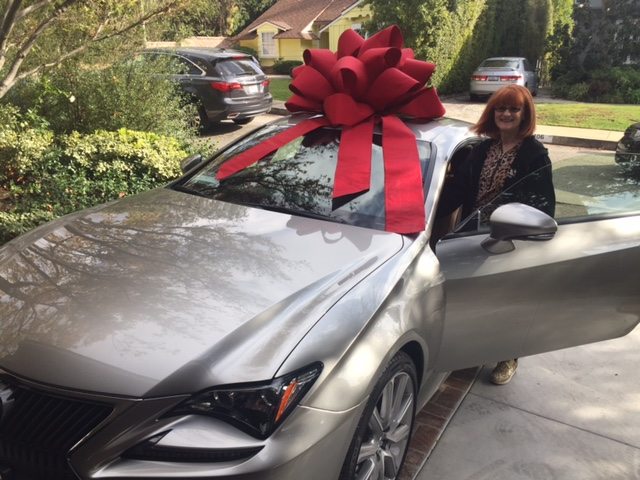 Last year, I got a call from a phishing scam.

The man on the phone called, sounding like many other telephone solicitors. He said he was from my bank, and I was on a list of special accounts that they were making a special offer to (and don’t we all like to feel our bank thinks we’re special?)

It was for a new credit card with lots of rewards attached and a zero interest rate for the first year, and 1.99% after that.

Well, that was quite a deal, and although my credit cards are good, they weren’t that good, so I said, “Okay, I’ll take it.”

The man went through all the pro forma features, confirming my name, address, etc.

And then he asked the question that sent the red flag up and the horn blowing in my mind. He said, “And what’s your social security number?”

“Wait a minute,” I said, “if you’re my bank, you already have my social security number.”

“Well, we’re a different department and we don’t share information between departments,” he explained.

No, no, no. I knew that this was a bogus call and a scam. I remember getting an email warning about this very thing. The emails said the scammers would sound so good and professional and they seemed to already have your pertinent info. But they needed one thing to put it all together and steal your identity: your social security number.

I called my bank’s fraud department to tell them what happened, and they said, yes, it was a phishing scheme and those guys are out there all the time trying to get people to fall for it.

So don’t fall for it! Good luck out there, dolphins!