“If you lend someone twenty dollars and never see that person again, it was probably worth it.”—Unknown

Allan is a sharp, young attorney in his own private practice. Like many sole practitioners, he leases office space from a larger law firm, and shares some of their equipment. He pays them for use of their copier and fax machines, for example. It is a co-operative, dolphin relationship that works in harmony for both parties. Most of the time.

Recently, Allan spoke to me of his growing irritation with the senior partner of the law firm.

It seems a shark fin or two was beginning to mar the surface of their relationship. On one occasion, Allan had a prospective client in his office, who he realized needed an attorney specializing in a kind of law that he didn’t perform. The larger law firm did perform this kind of law, however, so Allan hailed one of their attorneys, David, and introduced him to the prospective client. David said he was sure he could help, and escorted the client off to his office.

A few days later, Allan saw David in the hall and asked, “Whatever happened with that client I introduced you to?” “Oh, it turned out great!” said David. “He hired us and I’ve spent the last two days just working on his case!” And David rushed off.

As Allan stood there, glad to have helped out but wishing he had gotten a thank you for his trouble, the head of the law firm approached him. “You’re not paying enough money for using the fax machine in this office. We’re going to have to start charging you more!”

Poor man. He had no idea just how terrible his timing was.

Well, Allan bought his own fax machine the next week. And his client referrals are going to another law firm—of dolphins who say, “Thank you!”

Take another look at the people around you. Are they saying “thank you” enough? Are you?

Today’s Affirmation:
“I thank God and all the people around me for my abundant blessings!” 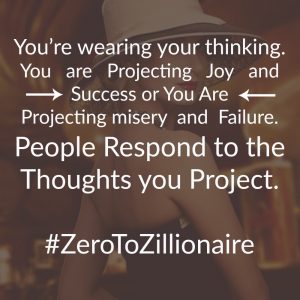 I remember when Allan told me this story and how amazed he was that someone would complain about the little fax charges and ignore the big money they were making from his referrals. But people do that all the time. It’s another version of “penny wise and pound foolish”. That old saying applies to earnings as well as expenditures.

Business owners will often spend a lot of time and energy promoting a product or service that doesn’t bring in much income and ignore working on the big ticket items because the sales process is more involved, or more uncomfortable. I heard someone recently say, “In order to succeed, you have to get comfortable in the uncomfortable places.”

That is so true! The sales conversation is often uncomfortable for people, so they don’t do it. I read a statistic years ago that said that 63% of professional sales people never ask for the order! It’s amazing, but true. We don’t want to do “bad sales” and be pushy, so we often just take about how wonderful our product or service is, give plenty of examples, and never complete the sale by saying, “So, would you like to buy this?”

Amazing amounts of money are left behind that way. People want to buy or they wouldn’t be talking to you. But they need help past their objections. If you really believe your product or service would help this person, you have to be able to coach them past their obstacles and help them see the benefits that will accrue to them after they buy. You’ve worked hard sending out your ships, guiding them into your harbor – don’t stop before the treasure is unloaded at the dock!