To Save or Not to Save?

“A deficit is what you have when you haven’t got as much as you had when you had nothing.”—Gerald F. Lieberman

People with debts often ask me if they should pay them all off before starting to save money for the future. Most financial planners and accountants point to the fact that it’s not financially smart to be saving money and only earning 5 to 8 percent on the money when you could reduce debt that is costing you 15 to 25 percent. This certainly makes mathematical sense.

But mathematical sense is not the only thing that should be considered here. Human beings are complex creatures, and habit and emotions play a significant role in behavior.

Studies repeatedly show that Americans don’t save much of their income. Consumer spending accounts for two-thirds of the economy, and consumer debt continues to rise. The endemic habit is to spend a lot, save a little, and go deeper in debt. To change this habit, new behavior is required. So my suggestion is to start saving now, even if you are in debt, because you need to begin the savings habit. It may take you longer and cost you additional interest to do it this way, but in the long run you will profit from it.

Today’s Affirmation:
“I save money happily and responsibly!” 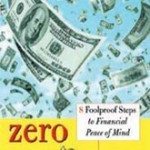 Circumstances change. You’re lucky if you get over 1% today. But then, mortgage rates were higher, too, in the 7-8% range, whereas now I’ve seen them advertised as low as 3.25 % for an ARM.

The point is that you have to stay attuned to changes in the economy. What was a good investment last year can be a bad investment this year. You need a financial planner to assist you in deciding the best investments for your age and portfolio. When you’re younger, you can take advantage of higher paying investments that have a higher risk factor. When you’re older, you need more conservative investments to assure you that you’ll have money to live on in case you get to that point where you can’t or don’t want to work any more.

The changes in the economy have resulted in our local, state, and national budgets being out of whack. Mandates for government spending and pensions for government employees that were made in boom times are difficult to fund during down times, and there are calls for radical changes and budget cuts. Everyone gets upset over threats to their financial piece of the pie. Voters are asked to cast their ballot for the cuts they prefer.

The problem is that the voters are asked to make budget decisions on individual cuts in spending without taking into consideration the whole picture. It’s impossible to do this and come out with a budget everyone can agree with. I think that the entire budget should always be included in the voters’ pamphlets so that you know exactly what is being preserved and what is being sacrificed. No one can make an adequate decision unless they have this information.

Instead, all we get are the politicians arguing for their fiefdom. And since they are all funded in their campaigns by big business, where do you think their common interests lie? Our tax system is a mess. Health insurance is a bigger mess. People are paying exorbitant amounts for medical insurance and costs keep rising because health insurance is a for-profit business and they make the most money by NOT serving their customer. Putting a national health care plan in their hands is just about the worst financial decision our government can make. Now there’s talk about ending Medicare and just giving seniors vouchers so they can buy their own insurance. Good luck with that.

It’s time for everyone to learn about budgeting and saving – for themselves and for their government. Be informed, be diligent, and make your voices heard. We the people still have the power of the vote, but we’d better be informed citizens so we can vote for the right things.

Stay attuned to changes in the economy. What was a good investment last year can be a bad investment this year.