We Are Not Alone

“Anyone can cut an apple open and count the number of seeds. But who can look at a single seed and count the trees and the apples?”—Dottie Walters

I smile to myself as I write the title of this page. “Hmm,” I wonder, “Will the reader think I am saying we are not alone in the universe, that flying saucers and little green Martians abound, that I am a UFOer?” I will tell you, I have not ruled it out.

I have a picture of “several hundred galaxies never before seen” as captured by the Hubble telescope. There are approximately one hundred billion stars in one galaxy—and then this new looking glass shows us several hundred of these collections of one hundred billion stars that no one knew was there. As I marveled over this picture, my father pointed out to me that the picture only showed one tiny keyhole portion of the night sky, and that the camera could be pointed in any other direction for three hundred sixty degrees and find stars and galaxies ad infinitum. “Billions and billions” of stars, as Carl Sagan said. Infinity.

Infinity: boundless, countless, endless, eternal, everlasting, incalculable, incomprehensible. I grasp at the fringes of the idea, a blind woman trying to imagine a painting. How vast is this void in which we hang suspended, tiny bits of flotsam in the cosmos sea. My mind creaks open to the possibilities of existence in other star systems, other dimensions, other times. Alternate realities. Imagination soars outward, yet balks finally at the enormity of the task. My thoughts fall back to Earth, the one teeming ball of life I know.

It doesn’t matter if we are alone in the Universe or not. What is important is that we are not alone on the planet. Whatever you believe about the Universe and its inhabitants, the congregation of beings with which you exist collectively on this globe have primary importance for you. Each individual can do very little alone but exist, and sometimes not even that. Yet together we can build communities, cities, airplanes, space shuttles, telephones, computer networks, pyramids, and Eiffel Towers. We write books for others to read, produce food for others to eat, manufacture cars for others to drive.

I believe there is meaning and purpose to life, and the clues are hidden in other people. Search them out, it’s a monster jigsaw puzzle—and it’s fun. The answers are not for you to discover alone in a void; if it were so, we would all be on our own little individual planets—with instruction books, tapes, and videos. There are certainly enough planets to go around. We are here together for a reason. Your purpose in life is to figure out what that reason is. And every other person here is your teacher.

Today’s Affirmation: “I celebrate the wonders of the Universe and my place in it!”

One year, on the day after Christmas, and I was still giggling to myself. What a crazy, funny, happy family I have! In case you missed “The Saga of the Green Beans”, as my family gathered around the turkey at Thanksgiving, we teased my sister Carole unmercifully about having forgot to cook the green beans. That became a running theme of the evening. The best line of the night came from Carole’s daughter Katie, who, when asked what to do with the placecards at the end of the meal, said, “Keep them. They’re redeemable for green beans!”

So of course, at the following Christmas dinner, my sister Jane proudly displayed the green beans in the center of the buffet, often asking the table, “Would you like some more green beans?” I should have remembered my placecard…

Dick and Jane (ah yes, family joke there, too) had just moved into a lovely new home in Camarillo three days before Christmas, but gamely hosted Christmas dinner anyway, with a Charlie Brown 3-foot tree (“only $5”, Jane proudly told me). The table was beautifully set with holiday trimmings and all the food was scrumptious. Roast beef, roast pork, potatoes au gratin, cranberry jello salad, the never-to-be-forgotten-again green beans, and for desert, Carole’s scrumptious home made apple pie and my Southern Mississippi pecan pie, along with assorted cookies and the traditional See’s Candies. Dieting is for wimps.

Ms. Kitty, a foundling feral cat that Dick and Jane had discovered in the bushes of their home several years ago, was in a bit of a snit with the move, hiding under the bed all day. Ms. Kitty was always in a bit of a snit, actually. When we were told she had taken to prowling around the new house at night, Carole and I got the giggles picturing Ms. Kitty as the “vampire” cat. We knew Jane was concerned about letting Ms. Kitty out in the new house’s back yard, which was over an acre of hills and there were coyotes reported in the area.

“Are you kidding?” I snickered. “The coyotes are going to run for the hills if they encounter Ms. Kitty having a hissy fit! Carole mimicked a coyote coming down and then backing up with a fearful expression. “Yeah,” I contributed, “the lead coyote will run back to the pack screaming, ‘Retreat!! For God’s sake, get out!” We collapsed into those side-splitting, tear-squeezing, tummy-hurting hysterics that are so delicious you know they must be healing you of a thousand ills. 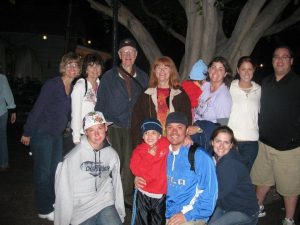 Home and family – either your family or origin or the family you’ve chosen – that’s the real celebration of the Holidays. You are never alone when you have family. As Leo Buscalia once said, “Where love is concerned, too much isn’t even enough.”