The Black Limo vs. the Volkswagen

“The greater danger for most of us is not that our aim is too high and we miss it, but that it is too low and we reach it.”—Michelangelo

Annie, my artist friend, had found the Black Limo and gotten in. She was selling paintings to people, even selling a series of paintings to a company for their corporate offices. She arranged for a one-woman show of her work to be scheduled at an art gallery, and had interest from other galleries as well. She was an artist on the move!

I hadn’t seen her in a few months, when I called to chat. She was in the middle of a big painting project. But not painting her art. No, painting her house. Big house, big project. Very distracting. Very off-purpose for her goals, dreams, and desires. “What was she doing?” I wondered. She had gotten out of the Black Limo. Then she told me she was thinking she should go back to school and get a degree in art. Nope, she hadn’t gotten out of the Black Limo. She was about to crash the Black Limo and get in a rusty ’74 Volkswagen instead. 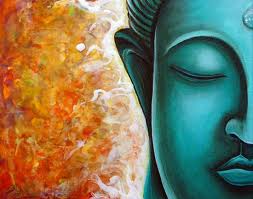 Buddha by Gayle Etcheverry, author of “Thinking Outside the Frame”

I asked how long it would take to get her degree. “Four or five years,” she told me. “And then what?” I asked. There was an uncomfortable pause on the other end of the phone. I asked if any of the art galleries or corporations or buyers had asked to see her art degree before they bought her paintings? Annie groaned and then giggled on the other end of the phone. “You think I’m just going back to school to play it safe and not have to be sending out ships and selling my art, don’t you?” she accused. “I don’t know, what do you think?” “I think I’m busted,” she sighed. The Black Limo was safe. We left the Volkswagen burning by the side of the road.

Of course, education is extremely valuable, and sometimes it’s a requirement. If you want to be a doctor, or an attorney, or a dentist, you have to go to school and get a degree to get your license. So do that. It’s necessary. And if you’re smart, you will never stop learning. Just don’t use it as an excuse to stop doing.

The last time I looked, you didn’t have to have a license to be an artist.

Today’s Affirmation: “I love what I do and that love brings me all the money I want.”

People tend to make too much out of credentials. It’s all very well to get go to school, get a degree, and set up a professional practice. It means that you have accomplished a certain amount of study and discipline, and that’s great.

But there are a great many career paths that don’t depend on having a credential. Bill Gates, Steve Jobs, Walt Disney, and Steven Spielberg, for example. They were born to talents, skills, and creativity and went off on their own without getting a college degree or any certification. They just went to work and started doing it.

Once at a networking meeting I attended, each person took their turn giving their 30-second commercial about their business. All three of the people who gave their presentations right before me put emphasis on their credentials and certifications – one had a Masters Degree in Business, one had an MFCC, one had a Ph.D.

Then it was my turn. “I acknowledge these wonderful people who have such distinguished degrees,” I began, then turned to the audience and smiled. “I on the other hand, have no credentials whatsoever. I’m a graduate of MSU – make stuff up. I’m a Financial Stress Reducer and I certified myself!” Busted them up laughing.

Back in the day before the proliferation of colleges and universities that everyone could attend, most people learned a trade or profession by becoming an apprentice to a master craftsman or tradesperson. You worked your way up to journeyman and then became a master yourself. We tend to forget that there’s more than one way to become proficient at something.

In the 20+ years I’ve been teaching my workshops, I’ve only been asked for my credentials one time. A woman had already signed up for my class when a friend asked her what my credentials were. “I don’t know!” she exclaimed, and called me to find out.

I laughed. “Well, I have a BA in Dramatic Art, and belong to the Screen Actors Guild and Actors Equity, which qualifies me as a workshop leader,” I told her, “and I owned a business management firm with thirteen employees for twelve years, which gave me a lot of experience with helping people manage their finances. But my true credentials are the results my clients get.” (For some of those, go to http://www.chellie.com/financial-stress-reduction-telecourse-information.html)

In the end, it’s the results that count. When you buy a painting, do you care what degrees the artist had? No. You just care that you think the painting is so beautiful that you want to own it and hang it in your house.