“The vision must be followed by the venture. It is not enough to stare up the steps—we must step up the stairs.”—Vance Havner

Thinking positive is your first step to living rich, inside and out. But it is not enough. You have to take action to achieve your goals. I call this “Sending Out Ships.”

In the nineteenth century, the merchants in London built grand, tall-masted sailing ships. It would take many months, sometimes years, to build them. Then they would hire a crew, outfit the ship and store provisions for the long sea voyage. One fine day, the ship would weigh anchor, hoist her sails, and sail out of London harbor, on her way to visit foreign ports and trade for gold, jewels, silks, and spices. The trip would take many months—often years—and there were no communication lines open then: No ship-to-shore radio, no telegraph, no cellular telephones. Once the ship had sailed, the merchant could do nothing more; only wait for that future day when the ship would return, sailing into London harbor laden with treasure. On that day, the merchant’s fortune was made. And that’s where the expression “I’m waiting for my ship to come in,” comes from.

But some people are going down to the dock, waiting for their ship to come in—but they haven’t sent any out! If you want the fortune, your responsibility each day is to send out some ships. And you had better send out more than one, because stuff happens to ships: One runs aground just outside of the harbor, another sinks in a hurricane. A few get commandeered by pirates, the whirlpool gets one, and on the next one there’s a mutiny and they sail off to Pitcairn Island and aren’t heard from for another twenty years. Then, of course, there’s the one that hits the iceberg! Once you send the ship out, it’s out of your control. You are only in charge of sending it out, not when it comes in.

When you get into the habit of sending ships out on a daily basis, even if you know some ships aren’t going to make it back home, you are still confident and optimistic because you know you have a whole fleet sailing out there. It creates a positive expectation that ships are going to be sailing in, docking at your pier and unloading riches for you any minute. Positive energy shines from you. You feel good about yourself because you’ve been doing what it takes to succeed. This is what Tony Robbins, in his book, Awaken the Giant Within, calls “massive, positive, constructive action on a daily basis.” (Although that sounds a little too much like hard work to me.) I prefer the image of breaking the champagne bottle and waving goodbye to a proud clipper ship on a beautiful spring day as it sets forth on my behalf. And then celebrating the ship’s safe arrival with all my wealth.

Send those ships out every day. Then prepare to unload your treasures. 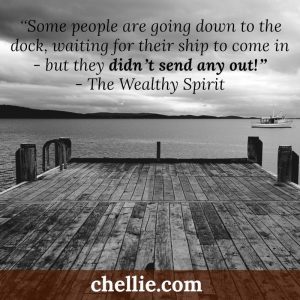 Every little action you take towards getting your goals pays off. Even the ships that sink are adding to the energy you possess that helps build the next ship. It doesn’t matter that some ships sink, it matters that some of the fleet make it into port unloading treasures at your dock.

People often ask me to give them examples of ships. If you’re in business for yourself, ships are sales and marketing. Here are some of my ships:

An attorney in Texas named Lucy, gave a great example in one of my Financial Stress Reduction® Workshop teleclass. She said she had signed up for my newsletter, read them for months, then signed up for my 365 daily pages from “The Wealthy Spirit”. As she read them each day, so many of them spoke to her that she started printing them out and putting them in a notebook. When she got so many the notebook was messy, she decided to just buy the book. When I announced in my newsletter that I was having a free teleclass “Confidence, Charisma, and Cash” she signed up for it and listened. She wrote me to say thank you and that she enjoyed every minute of it, and she wanted to sign up for my workshop! That’s when I called her and closed the sale.

This is how sending out many little business ships that finally cumulate in someone becoming your client. Some people refer to this as the sales “funnel”. You provide free information and newsletters, then some low cost services, and then a bigger sale. It takes sending all the little ships to produce a big ship coming that brings you the treasure. But it all starts with sending out a ship. And then another one…