“It doesn’t matter who my father was; it matters who I remember he was.”—Anne Sexton

My dad is great. Growing up in the Great Depression, he lived on thin money much of the time. He met my mom when she was a secretary and he was a young cadet. They married in the midst of World War II. When he returned from active duty, he got his engineering degree—and me. Employment called him to Chicago, and my sister Jane made her appearance. When a man from California was heard bragging about mowing his lawn in his shirt-sleeves in February, Dad dusted the snow off his boots and moved us to Los Angeles. Third daughter, Carole, joined us there.

Dad worked in the space program at North American Rockwell. Dad loved us, encouraged us, helped us with our homework, disciplined us when we needed it, made the best jokes and the best hamburgers, and was our rock, our support, our stability. A quiet man, he dispensed wisdom in little nuggets when we needed advice and financial support in big checks when we needed money. I learned about positive thinking; he encouraged us to send out ships, although he didn’t call it that; and he taught us to count our money and save. He was always there when the seas got rough, and cautioned us that not all the fish in the sea were dolphins. He taught us ethics, he taught us responsibility, he taught us humor.

Dad is in his eighties now and should be the poster child for enjoying retirement. He gets together with friends regularly, has weekend golfing getaways, takes piano lessons, and is learning to compose music on his computer. He’s almost busier now that he’s not working than when he was! But he always has time for the family, his daughters, sons-in-law, and grandkids, and his laughter and generous spirit brighten all our gatherings. He always has some new story to share, correspondence from an old friend, an article cut out of the paper, or a new book to read. His fascination and love of life inspire us all.

He showed me a letter he had written as a young man of twenty-two to my mother’s parents. I read with tears his earnest promises of love, devotion and support for Chellie LeNell, and for the family they would raise. I acknowledged him for having made such a beautiful mission statement for his life—and for having lived it completely. 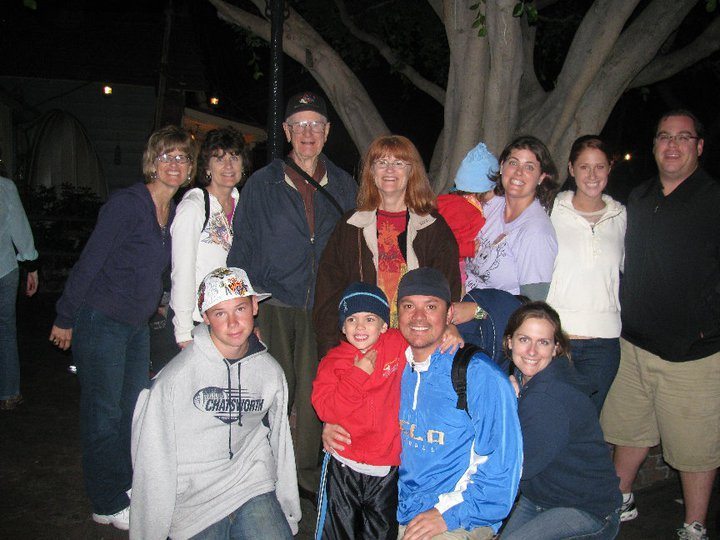 Many times over the years, I have read in theDear Abbyand Ann Landerscolumns the recommendation that you write your parents a letter, thanking them for their gifts of light and life and love; that such a letter is treasured beyond gold. This is mine, daddy. I love you!

When you’ve got dolphins in your life, appreciate them. Thank them. Give your parents of birth or your parents of choice this gift. Write them today. It feels so good to do it, you’ll find it’s a gift to yourself as well.

Today’s Affirmation: “I bless and thank my parents, who taught me about life and love!”

Many of you know that my Father, Mark Campbell, made his transition to the next experience last May. In hospice for a mere four weeks, we had the opportunity to surround him with love and bid him a fond farewell. We sang, and laughed, and told stories and said, “I love you” often. He said he hoped to see us in the next life, and I said, “Dad, you’re taking a trip that we all will be taking after you. You are just going before us to scout it out, but we’ll catch up to you later!” And then, his goodbyes having been said, he slipped peacefully away in his sleep.

We held the Celebration of his Life at Rose Hills in Whittier, and it truly was a celebration! Many of his old friends were there – from the neighborhood, his workplace, and his church. How wonderful it was to see them and share treasured memories!

My sisters, Jane and Carole, and I were inspired all week to write our eulogies and give testimony to our fabulous Dad. Afterward, at the reception, many people exclaimed how uplifting and positive the service was, and that was just what we wanted. Yes, we will miss him, but that was not the focus. We wanted to share with all our friends just how special and wonderful he was, and what a blessing family can be.

Jane spoke of his brilliant inquiring mind (M.S. from M.I.T), his many years of work on the Space Shuttle, his interest in museums and history. When Dad said to her husband, Dick, “I’m just not as sharp as I used to be” Dick answered, “That’s okay, Mark – you’ve just come down to our level!”

Carole added stories of his competitive spirit, his interest in games and golf, and his many poker games with her family. He researched the family genealogy, and when our mother, his beloved wife Nell, passed away suddenly, he became both Dad and Mom to us all.

I spoke of Dad’s personality and humor – he was so funny! I think you’ll enjoy these stories!

A Warm and Funny Celebration of Life

In 1974, I was performing in Lubbock, Texas at the Hayloft Dinner Theater. The play was Love and Kisses and the star was Lyle Talbot, most recognizable as the neighbor on Ozzie and Harriet. Just before show time one Saturday night, I got a call from my Dad. He just had to tell me that at the office one day, he had mentioned that I was appearing with Lyle Talbot and his boss exclaimed that Lyle was his cousin! What a coincidence!

We laughed and talked awhile and then Dad said, “Well, how do I get to the Hayloft?” “How do you get here?” I asked. “Where are you?” He said, “I’m at the airport in Lubbock.”

I couldn’t believe it. He had had a business trip to Houston, and thought he’d make a side trip to Lubbock to surprise me. I was so excited! I told everyone backstage what had happened and that my Dad was coming to the show. Lyle Talbot spoke to the audience, told the story and introduced my Dad, having him stand up and take a bow. Dad and I were both beaming. It was one of the highlights of my life.

One of the best things about our Dad was his sharp, wry sense of humor. For example, when I was in high school, I made a huge collage out of little bits of colored tissue paper. It was a beach scene, with ocean and palm trees. One day when I went to work on it, I discovered that Dad had made an addition of his own to it: he had cut out a photo of two people walking on a beach in the National Geographic magazine, and pasted them on my collage! We all giggled every time we looked at that picture.

Dad never could resist a good joke, even when it cost him.

Back when remote controls for TVs were new, we kids were visiting and had a family dinner around the TV with our TV trays. At one point, Dad asked Mom to change the channel, and she got up to make the switch. I turned to Dad and said, “Hey, Dad, why don’t you get a remote control?”

With that familiar twinkle in his eye, he gestured at mom and said, “I already have one!”

We all burst out laughing, and Mom, in her best insulted Mary-Tyler-Moore voice, said, “Oh, Mark!”

Of course, the next time we visited, they had a new TV with a remote control.

Dad and I shared a love of science fiction and I grew up reading the classics: Isaac Asimov, Robert Heinlein, and Ray Bradbury. When friends would tell me my ideas were a little “out there” sometimes, I said  “What do you expect? My Dad makes space ships for a living!” Dad and I always went to the openings of all the latest sci fi movies.  I don’t think it’s an accident that the newest “Star Trek” movie opened the day of Dad’s Memorial service. I’m sure Dad arranged with Scotty to beam him up!